While millions around the world watched the opening ceremony of the Beijing Olympics, no one was aware that the adorable little girl that sang “Ode to the Motherland” was in fact lip syncing! 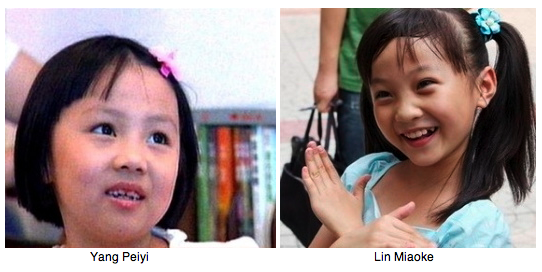 So the pigtailed Lin Miaoke, a veteran of television ads, mouthed the words with a pixie smile for a stadium of 91,000 and a worldwide TV audience. “I felt so beautiful in my red dress,” the tiny 9-year-old told the China Daily newspaper.

China’s reputation for presenting flawless performances caused an unnamed official to make the change just house before the ceremony started.

“We had to make that choice. It was fair both for Lin Miaoke and Yang Peiyi,” Chen told Beijing Radio. “We combined the perfect voice and the perfect performance.”

“The audience will understand that it’s in the national interest,” Chen added.

The sad part is that Chinese newspapers called nine-year-old Lin Miaoke an instant star with the patriotic song, obviously not realizing that she really did nothing more that put on a pretty dress and move her lips…