Maritza Salinas, 35, is an unlikely math lesson.  Each pregnancy, she has one more baby than she had the pregnancy before.  She had her first daughter 17 years ago, then gave birth to her twin daughters, 15 years ago; and July 5th, she welcomed a robust set of triplet boys. 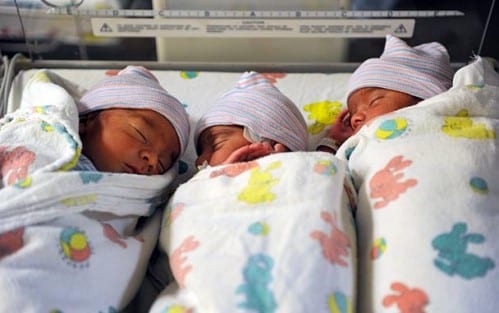 The odds of giving birth to a singleton, a set of twins and a set of triplets, in that order, are approximately 1 in 264,000; a rare family, indeed.

Maritza did not participate in fertility treatments.  Her large family was purely the luck of the draw.  Her ob-gyn, Dr. Eric Brown, says, “It wasn’t a medical feat.  It’s a blessing more than anything else.”

The family is thrilled to welcome the boys into their fold.  Maritza’s teenage girls had been badgering their mom to have another baby.  Yazmin, 15, says, “We are so happy.  We don’t need to fight over them.  We’ll each have one.”

Maritza was happy with her three girls, and for a long time, had no plans to expand her brood.  But, after marrying her second husband, Isidoro Padilla, she gradually warmed up to the idea of adding to the family.  She didn’t expect to add three more, but says, “I was…in shock that I was having triplets.  But mostly I was happy.”

The boys are healthy and doing well.  They were born only slightly premature, at 36 weeks.  Salvador was born 6 pounds, 4 ounces; Julio was 4 pounds, 8 ounces; and Miguel came into the world at 6 pounds on the nail.

Maritza is thrilled with her family of eight and is confident that her daughters will be a huge help with the babies.  She’s finished having little ones now, however, saying,  “Otherwise, next time, I would have four.” – Jen R, Staff Writer