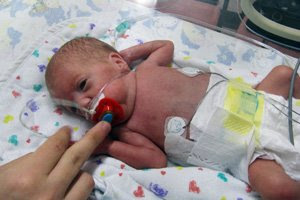 Born at just 1lb 2oz Chloe Wilson, has stunned doctors by fighting her way through two months of life… and going from strength to strength.

The tiny micro-preemie, who arrived at just 23 weeks gestation, is one of the most premature babies to have survived in the UK .

She was born just six minutes after twin sister Ellie, who clung to life for 30 hours before passing away.

Her parents, Michelle and Steven, have spoken of the shock of discovering Michelle was giving birth more than four months early, the agony of losing their first born and the delight that Chloe has defied the odds to live.

“I was at home and I didn’t feel too good but didn’t think too much of it. “But as the evening went on I began to feel a bit of pain. By about 7pm I began to worry and we went through to Dryburn hospital where I was told I was 2cm dilated. I was given drugs to try and stop the process.

“But when I went to the toilet and looked down I could see a foot hanging out of me. It was obvious then that I was going to give birth.”

Doctors warned the couple the twins had less than a 10 per cent chance of survival . . . and Ellie didn’t make it.

“The staff were always honest with us and gave us the facts which is what you want. We were told that things weren’t looking good for her and that we should call our family so they could come to say goodbye. We had her baptised and a short while later she died.”

During her time in the NICU, Chloe has needed an operation to assist her breathing, a heart operation and a blood transfusion. For the last two months she has been in an incubator with oxygen to help her tiny lungs develop. The good new is – she now weighs 2lb 13oz.

Like Chloe’s family, we hope this little fighter makes it home for Christmas!