Home » Only 25% of All Sunscreens Provide Long-Lasting, Quality Protection 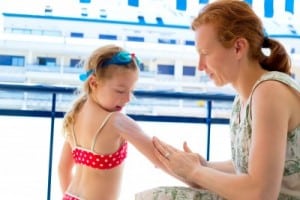 If your children aren’t out of school yet, they will be very soon, and you know what that means! Trips to the beach, theme parks, nature trails, and even just your local city parks.

Wise parents know that all that time outside calls for some serious sun protection, not just for us, but for our little ones who are especially vulnerable to the sun’s rays. So, as most wise parents often do, we head for the store, find the sunscreen that we believe will provide us and our children with the best protection. We apply it, and head out for some summer fun, assuming we and our children are protected.

But are we really receiving the kind of sun protection we need and assume we have? Or have we been misled by the deceptive marketing claims? A recent study on the safety and efficacy of more than 1,400 sunscreens, lotions, lip products and makeups suggests the latter.

“The vast majority of sunscreens available to the consumer aren’t as good as most people think they are, but there are a handful of products that rise above the rest,” Sonya Lunder, senior research analyst at EWG and lead author of the report told Medical News Today.

And it’s those deceptive marketing tactics that may be responsible for the continued rise on skin cancer rates. According to Lunder, awareness of risks associated with sun exposure have increased over the last 35 years, but melanoma rates (the most fatal type of skin cancer) have tripled since that time. And just since 2000, there’s been a yearly increase of 1.9%.

What’s more, deceptive claims made by sunscreen companies encourage consumers to use them incorrectly. They stay in the sun longer than they should, they don’t reapply sunscreen as often as they need to, and they fail to wear protective clothing in areas that are very prone to burning. This, of course, puts them at even greater risk. Some of those claims include:

These particular claims are now forbidden on sunscreen bottles and in sunscreen marketing, but prior to 2011, when the FDA issued sunscreen labeling standards, these claims were commonplace on most brands of sunscreen. The damage has already been done, and many parents still believe these same products provide this protection, maybe because the claims were there up until recently.

But there’s been another issue with sunscreen in the past. Until just a little while ago, sunscreens offered very little (if any) protection from ultraviolet A rays. These rays may be even more dangerous than the type that cause sunburns. And it’s only been recently that the FDA set standards for sunscreens that claim to provide broad-spectrum protection. Even still, the standards (along with the protection offered) is inadequate, study authors say.

In fact, after examining the some 750 beach and sport sunscreens, the EWG found that the new regulations have done very little to influence better sunscreen products than those offered before the regulations were put in place.

Though nearly every sunscreen sold in the United States meets the new FDA regulation rule for the broad-spectrum protection, very few have gone above and beyond those minimal regulations to provide high-quality sun protection. In fact, the EWG says that the standard is so weak that about half of those sunscreens wouldn’t be allowed on the European market, where safety and efficacy standards are much higher.

“European sunscreen makers voluntarily comply with European Union recommendations that a product’s UVA protection and SPF be coordinated so that the UVA protection is at least one-third as strong as the SPF,” the researchers said.

So what are wise parents to do? EWG’s study authors offered a few tips to help parents protect both themselves and their children from deceptive, unsafe, ineffective products.

“The best advice for concerned consumers is to use sun-protective clothing, stay in the shade to reduce intense sun exposure and schedule regular skin examinations by a doctor,” Lunder said. “And turn to EWG’s guide to find the best sunscreens for skin that isn’t protected by clothing.”

In addition, the EWG says products containing the following should be avoided: