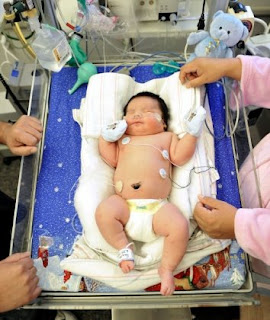 Sara and Richard Sault made history in California on December 23 when they welcomed their son Richard Walker Sault.

The newborn shocked hospital staff when he tipped the scales at 14lbs 2 ounces, requiring two doctors to lift the baby up during the C-section.

“We thought our first baby was a miracle, and now we have this little guy,” said Richard Sault, immediately correcting himself.

“Guess he’s not so little.”

Richard Sault Jr. is the largest baby ever delivered at Saddleback Memorial Medical Center in Laguna Hills — most likely in Orange County, according to veteran Saddleback doctors and an informal check of other major county hospitals.

Labor and delivery nurses at UCI Medical Center in Orange can’t recall a baby ever being born there weighing more than 13 pounds.

“That’s a big baby,” said Marty Wright, department manager of labor and delivery at St. Joseph Hospital in Orange. During her 21 years at the hospital, about 102,000 babies have been delivered.

The Saults were expecting a large baby, but not this large. Based on ultrasounds, doctors figured he would weigh 11 pounds.

Sara developed diabetes while pregnant, which can make a baby larger because of their high blood sugar.