Home » Orlando Bloom Hikes The Hills With Flynn On His Back!

Being on daddy duty didn’t slow Orlando Bloom down on Sunday.  The actor was spotted keeping the whole family happy has he went for a hike at Runyon Canyon Park in Los Angeles. 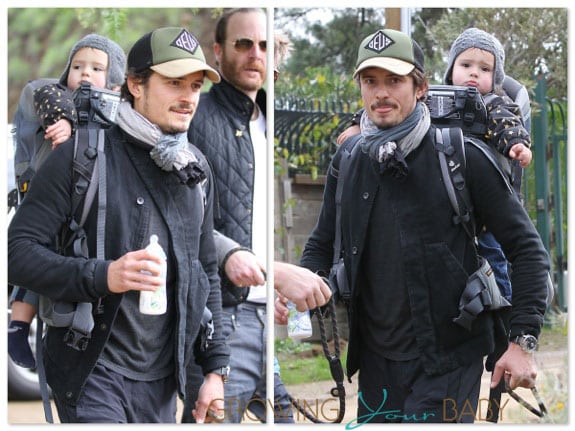 With Flynn on his back, Orlando walked the dog, while also carrying a bottle for his little guy.  Bundled up in a sweater and knitted hat, Flynn had the best seat in the house in a Deuter Kid Comfort II Child Carrier.

In California for the Holidays, the couple is often on the move and splits their time between Los Angeles, New York and Australia, where Miranda has family.

During an interview last year Orlando revealed that fatherhood changed his priorities.

“There’s no time for anything other than what you feel really is important,” The actor told The Sun  “Everything comes into focus. There was all that other nonsense you used to spend time worrying about, then, hang on a second, I’ve got this three-hour block here before I’m going to get baby puke on me. What am I going to do with that?”

It has also helped him be more passionate about his work,

“I just took a little bit of time to get my head straight, have a baby and a family and now I’m enthused about working a whole different way.”