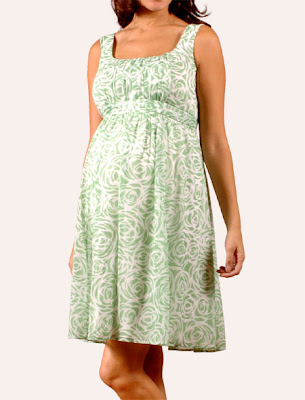 Every expectant mom has a story about how friends and family found out unexpectedly about the upcoming baby.

When I was just 11 weeks pregnant I had decided that it was still to early to tell people that I was expecting. Because my 1st son was born so early, I couldn’t help but feel like it would jinx the health of my new baby.

While trying on clothes for a wedding I needed to attend, I realized that my blossoming bosoms had nixed all of the options I had in my closet.

This was my first trip to the maternity store.

I quickly picked up a green dress that I felt could pass as a trendy option that did not scream ‘I’m Pregnant!’.

Matching it with pearls and even wearing high heals, I though for sure there could be no way that anyone would guess I was pregnant.

When I arrived, everything was great until a family friend starting admiring how cute my dress was.

She and her daughter both started saying that they had had difficulty finding a dress for the wedding and that while they were out, they hadn’t seen mine in the stores.

Continuing on, my friend asked where I had found it. I was lost for words and stuttered a bit not knowing what to say.

This gave her the impression that I was one of those people who doesn’t tell where they get stuff and she started to get embarrassed.

Apologizing, she said that if I didn’t want to tell where the dress came from – that was OK.

That is when I revealed where the dress came from AND that I was expecting baby #2!