Home » Over Half of Children Outgrow Egg Allergies, Study Finds 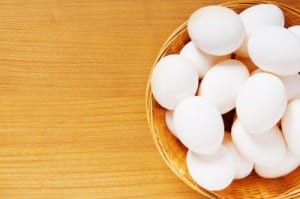 With the holiday season fast approaching, parents all over the world are preparing for their egg intolerant child. But all of that planning, extra food packing and ingredient questions may not be necessary, a new study suggests.

Presented at the American College of Allergy, Asthma and Immunology’s Annual Scientific Meeting, more than half of all children with egg allergies eventually outgrow them. What’s more, the study found that 56 percent of allergic children can tolerate baked hen’s eggs, as long as they are cooked at a temperature of at least 350 degrees for 30 minutes or longer (very common in most baked goods).

“More than half of the egg allergic children can tolerate hen’s eggs when they are baked at 350 degrees in products such as cakes and breads,” said allergist Rushani Saltzman, M.D., lead author on the study and ACAAI member, in a press release presented to the Medical News Today after the meeting.

In a separate study, also presented at the meeting, Ruchi Gupta, M.D., lead author and pediatrician, found that out of the eight most common food allergens among children, eggs were the most commonly outgrown allergy.

“Food tolerance was observed in one in four children, with 55 percent outgrowing their egg allergy by age seven,” Dr. Gupta said in the release. “Developing an egg tolerance is the most common for children, followed by milk. A small proportion outgrew shellfish and tree nut allergies.”

It was noted, however, that children who had severe reactions, like rapid swelling of the skin or tissues, breathing problems, and life-threatening anaphylaxis, were the least likely to outgrow their allergens over time.

But don’t reach for the baked goods just yet; allergist Richard Weber, M.D. and ACAAI president-elect said that no parent should try to reintroduce allergens back into their child’s diet, even if the reaction is mild.

“While these studies show many positive findings for children with egg allergy, parents must practice caution,” Weber said in the press release. “Introducing an allergen back into the child’s diet can have severe consequences, and should only be done under the care of a board-certified allergist.”