Home » Padma Lakshmi: “It Does Take a Village” 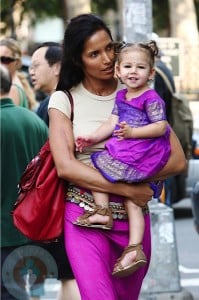 Forty-one-year-old “Top Chef” host, Padma Lakshmi, might seem like the face of modern motherhood, but Lakshmi refutes the title, telling Yahoo! Shine, “What are the faces of motherhood? You tell me. There are so many!”

Padma manages her television career, entertains in-home parties and parents her almost 2-year-old daughter Krishna. And she’s a single mom. Of course, Padma is a pretty fortunate single mom. She has a lot of support from family and friends.

“I am a single parent. But I don’t feel alone at all in parenting my daughter,” says Padma. “I have a big family, who I am surrounded by, and friends. Krishna has a whole other side of her family who lovers her too. And so Krishna is parented by me, but also by her grandmother and aunts and cousins and uncles and friends. It’s a corny thing, but it does take a village. The more who encompass her, the more different kinds of people who are in Krishna’s life, the better off she is.”

But while Padma shares her daughter openly with her friends and family, there is one place she won’t share her daughter – Twitter.

Padma is an active Twitter user and says she likes the fact that “it’s not a lot of words so you really have to say what you want to say and get it out,” but she states that her daughter is completely off limits on the ever-growing social network.

“I never tweet about my daughter. Never. I just want to be respectful of her privacy. My job as a mom is to know when to open my mouth and when not to,” Padma told Shine.

And while twitter followers won’t learn anything about little Krishna, Padma did share the type of foods the tot enjoys.

“My family has a really good diet. It’s mostly plant-based. She eats a lot of vegetables – kale and cauliflower. Lots of fruit. Lots of beans – every lentil on the planet she can get her hands on. She loves couscous. It’s not a lot of meat,” Padma shared. She does, however, plan to introduce the tot to meats later on “just because I want her to have a diverse diet so she can get along wherever she is and whoever she is with.” Speaking of food…. 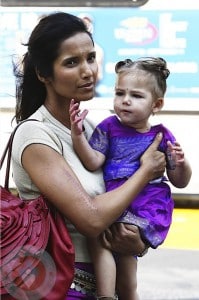 Holidays are just around the corner and a lot of us moms are about to go through the overwhelming task of entertaining large parties. Padma offered a few tips for making entertaining guests just a little easier.

“I tell people that, when you’re entertaining, choose a menu with most items that you can prepare ahead of time and then one or two dishes that you will finish off just before or during the party. Then you can enlist guests to help – and also kids!” she said, adding, “Kids love to help and they can, as long as it doesn’t involve knives or heat. They can toss a salad for you. They can fold the napkins. That makes them feel like it’s their party too.”

To help keep your celebration within budget Padma says,

“What’s good for the wallet is also usually good for the body. Rather than do a big beef roast, you can make a stew. It has chunks of meat in it, but if you slow cook it, you can use cheaper cuts of meat. You can add a lot of root vegetables, which stretch the budget a lot farther. You can wind up feeding twelve people instead of six.”

“The key to doing anything when you’re a mom – entertaining or anything else – is preparation and organization. That’s something I’m still learning how to achieve on a day-to-day basis!” Padma stated. Aren’t we all?!