Padma Lakshmi and daughter Krishna spent the afternoon hitting the shops in SoHo on Saturday(April 14). 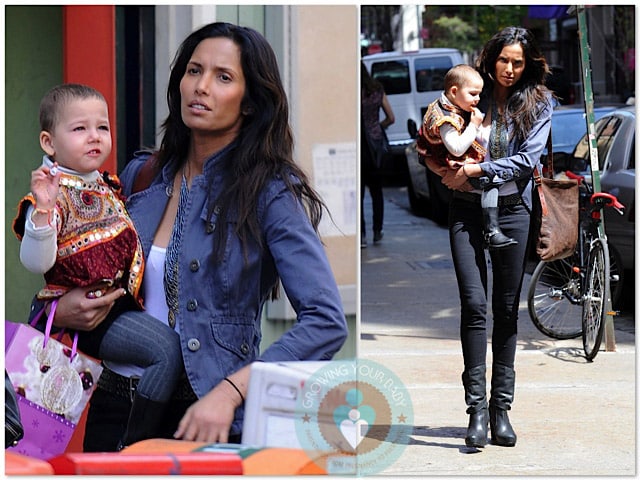 The Top Chef host, who is a single mom, recently spoke to Yahoo Shine about the support she gets from her family.

I don’t feel alone at all in parenting my daughter. I have a big family, who I am surrounded by, and friends. Krishna has a whole other side of her family who loves her, too. And so Krishna is parented by me, but also by her grandmother and aunts and cousins and uncles and friends. It’s a corny thing, but it does take a village. The more who encompass her, the more different-kinds of people who are in Krishna’s life, the better off she is.

And despite the fact that she is on TV, she insists she’s just like most of us,

In that sense, my life isn’t much different from other women who work and are moms. I just happen to be on TV. So I have professional hair and makeup…other than that, I am much the same! I still go buy my own groceries. I mean, I do the fun stuff. My housekeeper buys the staples but you know what I mean – normal stuff. I do sometimes struggle with what to make for dinner or I think, “I wish I did that, I should do that.” Not very different.

Krishna was cute in a pair of striped tights, biker boots and an embroidered frock.  She also sported a shaven head.

It was reported that the 41-year-old had gotten the two-year-old’s head tonsured after being inspired by a Mundan ritual where a child is freshly shaven to signify freedom from the past and moving into the future.