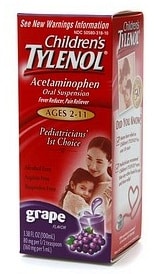 Federal health experts have recommended that dosing instruction for children younger than two years should be added mandatorily to all over-the-counter products containing acetaminophen like children’s Tylenol, a popular pain reliever and fever reducer used by parents.

The FDA had conducted a two day meeting to discuss the addition of dosage instructions for children 6 months to two years old and the panel advisors voted 21-0 in favor of adding the dose instructions.

Currently, the liquid medicine doesn’t contained dosing instructions for infants to encourage parents to seek medical attention for babies. But the FDA panel ruled that the lack of instructions was leading to confusion and could make parents give incorrect dosage to young children.

According to FDA data, the acetaminophen related overdose were found to be most common among children under the age of two and the cases had increased over the decade.

It is one of the most common drug found in many medications in the USA sold in formulations and in combination with other medicines. The FDA panel dealt with a small group of single-ingredient products, including J&J’s Children and Infants’ Tylenol, Novartis’ Triaminic, Prestige Brands’ Little Fevers and various drugstore brands.

When use as directed Acetaminophen is safe but overdose could lead to liver damage. In children, according to the American Association of Poison Control Centers 2.8 percent, or 7,500, of the 270,165 emergencies reported last year were due to this drug overdose.

Some of the panel members pointed out that the changes in the labeling were being proposed for a long time but were still not happening.

“It’s 16 years later, and we still don’t have a clear and effective label for this product,” said Amy Celento, the panel’s patient representative. “This is taking far too long — we can’t go the way of offshore drilling and wait until a disaster before we make necessary changes.”

In general, the FDA is not required to follow the recommendations of its advisory panel but it usually does. The present recommendation will be sent as a binding guideline to drugmakers.

The panel also recommended limiting cup measurements to milliliters only rather than both teaspoon and milliliter.

The Consumer Healthcare Products Association supported the panel recommendation and said in a statement,

“give parents and caregivers more accurate and detailed dosing information where it is needed – directly on the drug facts label.”

Members of the association include manufacturers like J&J, Novartis, GlaxoSmithKline PLC and makers of generic acetaminophen medicines like Perrigo Co. Earlier in the month the the group announced it would voluntarily eliminate infant drops of acetaminophen drugs.

The droppers were used by parents to administer the drugs to infants but starting later this year manufacturers will switch all infant formulas to the same dosage used in children’s acetaminophen products.

The panel’s final voting was 17-3 with one absenteeism that the FDA should consider mandating a single dosage for children’s solid acetaminophen tablets.