Home » Parents and Experts Express Concern Over Infant Use of iPads 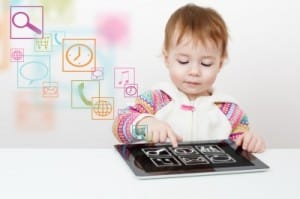 iPads, and similar devices, are some of the hottest products on the market today. They are flying off the shelf at an alarming rate and many parents are sharing these innovative products with their children. For older children, the applications can help open up a world of research, knowledge and learning.

But are iPads really beneficial for younger children? Experts  and parents have been asking themselves this question, and it resulted in a panel discussion in New York last month entitled “Baby Brains and Video Games.”

The biggest concern revolves around the brain development of children under the age of two. During the first two years of life, the brain triples in size. Neurological connections are formed at this time, and those connections are important for walking, talking, hand-eye coordination and even emotional development. The five senses play an integral part in that development (sight, sound, taste, touch and smell). This is part of the reason that infants mouth so much during these early years and it’s why many infant toys are designed with various textures.

Unfortunately, an iPad can only provide an infant with limited use of their senses – mostly sight, sound and touch (albeit, touch is still limited to the same texture). This applies, no matter how amazing the app may be.

“There are some pretty good apps and activities that encourage problem solving, memory, ordering, sequencing – virtual versions of games we used to play as kids,” said Texas pediatrician Ari Brown, lead author of a 2011 American Academy of Pediatrics report on the screen use of children under the age of two.

But those apps are really more beneficial for older children. A recent youtube video clearly displays the difference between real life touch and iPad touch for younger children. In it, a one-year-old is trying, in vain, to scroll through a magazine on an iPad. She then tries to touch through a real-life magazine. It almost seems as if she’s confused between the two.

This is an area of concern for some parents – parents like Sarah Rotman Epps, a Boston-based consumer technology analyst. She says that her two-year-old really “loves drawing on paper with crayons.”

“But he gets very frustrated when the pictures don’t move,” Epps added. “And I think that is really coming from the pervasive culture of video and animation.”

Paris psychiatrist Serge Tisseron worries about this exact same issue. While he’s an avid video gamer himself (at the ripe age of 64, mind you), he says that applications on tablet devices fail to teach children about real, tangible, three-dimensional space – you know, that space we live in.

“We know the toddler absolutely needs to engage all his senses,” said Tisseron.

Right now, experts aren’t encouraging a ban on electronic devices. They do, however, say that parents should set very strict limits for children under two years of age, giving them mostly opportunities to play with real, texture varied toys with no real set rules so that they can fully explore their three-dimensional world.

Aurelie Mercier and her husband, both graphic designers and parents to 22-month-old George work hard to keep these limits in place. Their son George spends only thirty minutes per week using their iPad. They say that he started asking for it at about ten months of age. And they enjoy letting him use it because they feel that it expands their son’s world.

“It’s a window onto tons of things that we don’t have at home,” like a virtual piano – one of George’s favorite virtual games – in place of the real thing, “and that can be condensed into a very small object.”

They plan to eventually start making their own children’s apps and have already designed an app for adults that produces virtual fireworks. (George enjoys watching the fireworks, but it’s not very interactive.) The couple says that they plan to make George their  “beta tester.”

But prying an iPad from an infant’s hands isn’t easy. And it can be very tempting to use it as a “virtual babysitter,” especially when there’s housework to be done or you’re sitting in a doctor’s office that somehow forgot that they cater to children and have no toys. The boundaries and limits recommended, however, are likely to be very important. I guess, if all else fails, bring toys in the diaper bag, wherever you go.