If you thought the grandparents who had pulled their granddaughter along in a toy car behind their SUV were off their rocker, wait till you hear what two parents in Fort Wayne, Indiana were just arrested for! 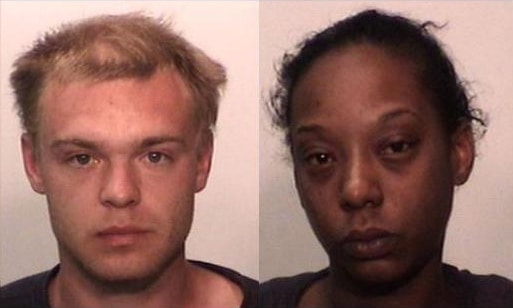 After making a liquor store run, Aaron Stefanski decided to strap his three children – a six-year-old girl and two sons, 4 and 5 – along with Jessica Clark’s 7-year-old daughter, to the top of his car with a tow strap… and drove away.

“I was only going to drive around the corner. I thought they would like it,” said Stefanski.

Police were called after the liquor store manager and other bystanders called 911, reporting the incident.

“With one of those straps you crank on a semi to hold down lumber, they were strapped with that thing, wiggling and wobbling down the street,” said witness Tom Nowak.

A U.S. Marshal was able to locate and stop the car just a few blocks away from the store. Officers questioned the couple, and one eye witnesses reported hearing Stefanski say, “It was only 20 feet.”

“I thought, come on, you know? Those kids’ lives were at risk. If he would have turned and one of the kids would’ve fell, he would’ve run right over them,” said witness Keith Kennedy.

After questioning Clark and Stefanski, officers almost let Clark walk away, despite the fact that her daughter was strapped to the top of the car as well. Eyewitnesses to the incident stopped them, however.

“Every said, ‘No! She watched it all, sat in the passenger seat and let it all happen. Take her too!’ So they called her back and handcuffed her,” said Nowak.

The police report also stated that Clark’s daughter has been placed in custody with child protective services and that Stefanski’s children were returned to their mother.

With this being the second story this month where irresponsible adult and intoxicated driving put the lives of innocent children at risk, I think it needs to be said that drinking and driving is never a good idea, and it’s illegal. Driving with a child in your car fetches you even higher charges and it could cost you custody of your child – if not your child’s life. And drunk, sober, it doesn’t matter – a child should never, ever, EVER be affixed to the outside of a vehicle by any method of any kind, ever. One wrong move and you could lose your child forever. It’s so not worth it.