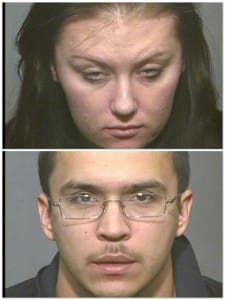 On Wednesday night, a Facebook user called in an anonymous tip to the Arizona Child Abuse Hotline after a mother had posted a picture on Facebook of her 10-month-old and 2-year-old children bound in duct tape.

In the photograph, which will not be released to the public, the children had their mouths taped shut and their ankles and wrists were bound. In one of the photos, one of the children was even hung upside down from a piece of exercise equipment.

Officers responded to the call and visited the Williams, Arizona home and arrested Frankie and Kayla Almuina on two charges of child abuse each, but the couple says the photos were just joking. Joking or not, officers saw this incident for what it was – child abuse.

“They did indicate that they were simply joking, however, it is apparent through the photographs that this was not a joke. The photos depicted the children’s faces in sheer terror,” stated Commander Rex Gilliland from the Coconino County Sherriff’s Office. “Clearly, you can’t tape another person’s hands and mouth shut, especially small children. It is clearly child abuse and they were charged appropriately.”

Sound horrific? Gilliland agrees. He stated that this is “one of the most horrendous things” he has ever seen in his 30 years of duty as an officer.

Currently, the children are in the custody of a family member and the incident is being fully investigated. A similar incident happened just last week when a Chicago father posted Facebook photos of his one-year-old daughter being bound with colored duct tape.

If the parents were willing to share this incident on Facebook, you have to wonder what was going on privately. I just hope these young children are able to heal and recover from this horrific incident.