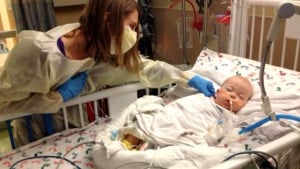 Earlier this month, five-month-old Keona Hinkel wasn’t eating like she should and she seemed tired all the time. Her mother, Kari Hinkel, took little Keona to the pediatrician. Not sure what was wrong, the pediatrician sent Keona and her mother to the emergency room. It was there that things took a turn for the worse.

Keona stopped breathing, and still, no one knew what was wrong with the chubby-cheeked infant. After being incubated, the ER department airlifted her to the Rocky Mountain Hospital for Children. There, she was seen by a pediatric neurologist who was the first to suspect that Keona had somehow ended up with infant botulism, a very rare but serious condition that can result in death if not treated quickly.

Thankfully, the treatment, botulism immune globulin, was flown in from California and administered to Keona. While she is still on a breathing machine, she is doing better since receiving the medication and is expected to make a full recovery.

According to the Centers for Disease Control and Prevention, 85 cases of infant botulism were diagnosed in 2010, and 84 were diagnosed in 2009. So again, the condition is extremely rare. But considering how quickly Keona went from simply not feeling well (which could have easily been confused with the flu at first) to no longer breathing, it’s easy to see why it is such a dangerous condition.

Keona’s mother is hoping to spread the word about infant botulism so that other parents can avoid facing the same (or worse) situation with their own children. Kari believes that Keona may have either had some indirect contact with honey and contracted the bacteria or picked it up from dirt and dust at a home that is currently under renovation. The disease, which comes for a specific type of bacteria, is most commonly contracted by children under a year old after consuming honey or corn syrup. For this reason, infants under a year should never be given these food products (which, if you read labels, are in all kinds of snack foods designed for children).