In a shocking incident Christopher and Mary Sultze, of Appleton, Wisconsin were charged with child neglect this month after it was revealed that the parents willingly starved their baby girl right from birth fearful that food would make her obese. 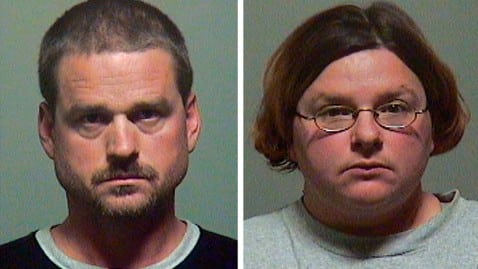 In just 14 months the infant had only gained five pounds. According to a doctor, the baby should have weighed at least 22 pounds to meet the minimum growth chart needs at her age.

The parents have been charged with a felony count of child neglect and could face a year in prison and a $25,000 fine if convicted.

The baby’s dad reportedly told medics at a check up in August that his child would ‘get fat’ in the hospital although it was recommended as the infant was alarmingly underweight.

Another doctor told the police that the poor baby girl had no fat on her body and was essentially starving.

Christopher appeared at Outagamie County Circuit Court yesterday and was released on bail at the condition that he would not be in contact with his baby girl.

The couple has three other children and Mary waived the right to a preliminary hearing yesterday in exchange for her release on bail so that she could return to them according to their attorney Brandt Swardenski.

‘I have serious reservations about whether there’s any criminal activity here or just misguided parenting intentions. This is a case where we need to reserve judgment until we learn more details on exactly what occurred,’ he said.

The baby girl was born in July 2010 and weighing eight pounds. In September she weighed just 13 pounds. Doctors were alarmed with her lack of growth and weight gain at her four-month checkup in November 2010, when she weighed just 7 pounds, 9 ounces.

The criminal report suggests that the parents were irritated by the doctors repeated concern for the baby. They were quite sure that the baby would gain weight eventually and that she was just growing slowly and ate well.

Month after month the little girl showed little progress although all her medical tests came back negative.

When in August doctors convinced the parents to let the baby be admitted to Children’s Hospital in Fox Valley for an evaluation the girl gained 8 ounces in a single day.

A social worker assigned to the family as part of hospital procedure noted that the girl’s parents were upset by recommendations that they needed to feed her more calories.

Her dad has insisted that his daughter was fine and did not need medical attention. He later told the policemen that his family followed a low cholesterol diet as he had undergone a bypass surgery for a blocked artery when he was 25 years old.

The court proceeding also showed that Mary Sultze had been charged with misdemeanor battery and disorderly conduct for biting her four-year-old daughter on the arm in 2009. At that time she had said that she did the act to teach the girl a lesson who had bit her elder sister. She had though later said that ‘it was probably not right to do.’

She ultimately pleaded no contest to the disorderly conduct charge, which is not an admission of guilt but is treated as such for sentencing purposes. Prosecutors dismissed the battery count.