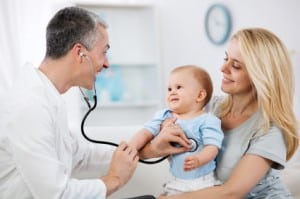 While a fever does not always warrant a visit to the emergency room, there are certain medical conditions that are associated with fevers; bacteremia, pneumonia, meningitis, ear infections and urinary tract infections, just to name a few. But how do you tell the difference between a simple cold fever and a serious infection fever? According to a recent study from the Netherlands, the best way to tell is to trust your instincts.

In a study that was published in the March issue of Pediatrics, researchers wanted to distinguish whether or not parents were making sound judgments about the need for emergency medical care for their feverish children. To determine this, they compared emergency room visits of more than 46,000 children aged 16 years or younger with a fever; 38 percent of those children were referred to the emergency room by a physician, 62 percent were referred by their parents.

In light of the results, lead researcher Dr. Yvette van Ireland from the department of pediatrics at Sophia Children’s Hospital/Erasmus University Medical Center in Rotterdam had this to say:

“Self-referred febrile children should not be generalized, and therefore not approached as a uniform group of non-severely ill patients. Measures to discourage parents from self-referral are undesirable. This may potentially result in delayed or missed diagnosis.”

Unfortunately, not everyone agrees with the study. Dr. Roya Samuels, a pediatrician at Cohen Children’s Medical Center in New Hyde Park, N.Y. says that the study doesn’t really apply to the United States.

In many cases, a fever is the body’s way of trying to fight off an infection. Often, those infections are untreatable conditions – such as the flu or a cold.

“No intervention is needed unless there are other telltale signs that this could be a bacterial infection. We look for other, more worrisome signs, that accompany the fever,” said Samuels.

Some of those signs include a child that is not eating, drinking, voiding or is lethargic or not as active as usual. If a child is experiencing troubles breathing or there are any signs of dehydration, the child should visit the emergency room immediately. Additionally, if a child’s fever persists for more than three to five days, they should be seen by a health care professional.

“I would take the results of this study with a grain of salt,” she said, adding that parents in the Netherlands might be more educated about the signs of severe illnesses in children. “Here, a lot of parents bring in their children for a simple cold with fever that could very easily be handled over the phone by a medical professional. We could save parents a lot of trouble and time going to the emergency room for unnecessary visits [if they called a health care professional first].”

Samuels does not want parents to think, however, that their gut instincts are always wrong. Often, a parent knows their child best and if there is a nagging feeling that something is seriously wrong, it is best to take them in and be wrong then not take them in and risk a serious medical emergency.

“Parents have a sixth sense when it comes to their own children,” Samuels said. “Physicians need to take that seriously.”