One man was in the right place at the right time when a baby crawled out the window of his second story apartment.  Authorities believe that the one-year-old baby was looking for his mom when he ventured onto the ledge during a heavy thunderstorm on Sunday in Xiaolan Town, Zhongshan City of Guangdong Province.

When passersby spotted the toddler they immediately started creating a spot for him to fall onto.  One man, however, managed to catch the child as he fell. 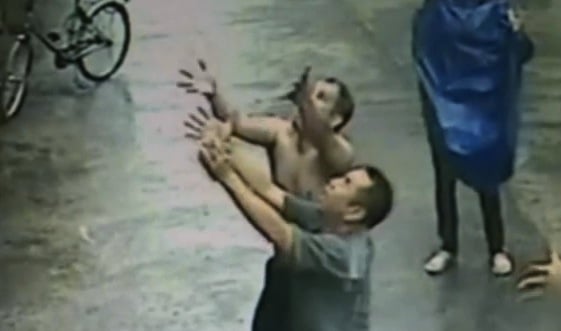 “Some people put down cardboard to avoid serious injuries to the baby if I fail to catch him,” the man who made the dramatic catch, Mr Li, said.

“I didn’t think too much at the time. I was just afraid of failing to catch him.

“It was nothing but human instinct to do so.”

And, in this digital age the whole event was caught on film.

Shortly afterwards the baby’s mom was photographed wrapping the baby up and whisking him away.

Hopefully they will install better locks on the windows to prevent this little guy from escaping again.