A British Columbia mom is thanking many people today after passersby came to the rescue when her six-month-old baby was trapped underneath a vehicle that failed to stop. 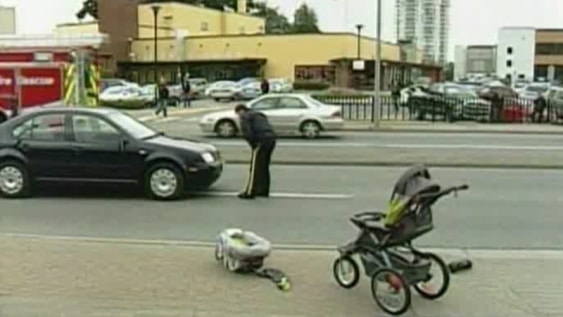 Those on the scene revealed that the baby was screaming and the mother was calling for help to get the baby out from under the Jetta.

Once witnesses noticed the infant’s stroller trapped, about six people rushed over to lift up the car and rescue the newborn, who had only minor scrapes and bruises.  This was likely due to the fact that the baby girl was still buckled in her infant seat.

When Mounties and B.C. Ambulance paramedics arrived, the baby was taken to hospital and was be kept overnight for observation. The mother had an abrasion to her lower leg, Nanaimo RCMP spokesman Const. Gary O’Brien said.

The family is from Port Alberni and will be staying at the hospital until the baby is released.

“The mother is extremely grateful, she wants to thank everyone involved,” Const. O’Brien said.

He also noted that the people who lifted the car will likely be recognized with a civilian bravery award by the Nanaimo RCMP.

There is little doubt that the outcome would have been very different had they not helped.

From the pictures it appears that the baby was in a BabyTrend Flex-Loc Infant Car Seat that was attached to the company’s Velocity Jogger.