It might have been just another day at the beach for some, but it is a day that one witness is not likely to forget any time soon. At the busy seaside town in the UK, two men pull up in a Subaru pick-up truck. In the back of the truck, a toddler is strapped into a car seat… no, no, not in the back seat of the truck – in the bed. 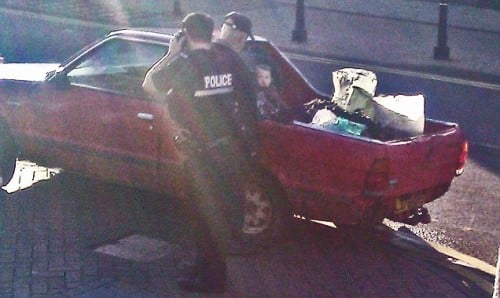 Sure, he was in his car seat, but that car seat was secured in the bed of the pickup with nothing more than a rope. To make matters worse, a great deal of debris was in the back of the bed with the poor little guy. To top it all off, the man left the child in the back of the truck as he took off to collect coal from the shore.

“I thought it was a doll at first. But then I saw the boy’s head move and he pointed at a bird in the sky,” said a witness that was so distraught by the situation that she took a photo of the tot on her mobile phone. “It is a completely idiotic way to transport a child. His seat was wobbling all over the place as the car pulled in. There were bags scattered all around him. Debris could have blown into the back and hit him. If the driver slammed on the brakes, he could have been crushed by bags of coal.”

I guess, in the man’s defense, there was a passenger who remained in the truck the entire time the driver went to collect coal, but the passenger was completely despondent to witnesses that attempted to speak with him. Only when officers arrived did he step out of the vehicle.

Officers had to go searching for the driver and ended up finding him at a fish ‘n chips restaurant. When they questioned him as to why the child was strapped in the back of the truck, he didn’t seem to see anything wrong with it.

“When police questioned the driver, he just said, ‘What’s the problem? – he’s strapped in’ and pointed to the rope,” said the witness. “Mo one could quite believe what they were seeing.”

For whatever reason, the officers allowed the man to drive away with the child. They did, however, make sure that the car seat and child were removed from the back of the truck before they were allowed to go along on their merry way. In Ashington, Nortumberland, where the incident occurred, it is an offense to drive with a passenger under the age of 14 who is not properly secured in a seat belt or child restraint; the fine is said to be £500. There is an investigation into the matter, but I can’t seem to understand, for the life of me, why this child was allowed to stay with the driver.

I know most of you parents reading this are sick to your stomach, and I know that most of you know, without a doubt, that placing a child anywhere but inside the back seat of a vehicle, properly secured in a car seat is dangerous and unsafe. But it seems that there is some kind of dangerous, crazy trend going on so I feel that I need to say this, yet again – children do not belong on the tops of vehicles, in the beds of vehicles, on the tailgates or bumpers or in a device being pulled behind a vehicle. These are all life-threatening locations for a child. Period. It is illegal to use “child restraint” practices such as these and it can cost your child their lives. Until your child is at least 12 years of age, they do not belong anywhere in or on the vehicle other than the back seat. Period. If they are required to use a child safety device – use them, every ride, every time. They save lives.