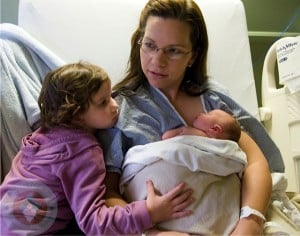 Jennifer Wagner thought she was having Braxton Hicks contractions as she listened to her husband, Jerod, deliver his sermon at church Alive, last Sunday, in Orange County, California.  Little did she know, she would soon deliver her fourth child, in the bathroom.

Over the course of the service, she realised she was actually in labor, but believed she had plenty of time to get to the hospital.

“I didn’t want to tell my husband yet because I knew he had to preach still.  It wasn’t until halfway through the sermon I realized these were real contractions,” Jennifer said.

When the sermon concluded, she made the call that it was time to head to the hospital, but first she needed to use the restroom.

In the restroom, things accelerated quickly, when Jennifer realised she needed to push.

The couple have three older daughters, but Jennifer had epidurals during their deliveries.  As a result, she was unable to gauge the pace of her labor as she approached the end.

Mom and baby were taken to the hospital and received a clean bill of health. Congratulations to the family on the new addition! – Jen R, Staff Writer