There is another baby on the way for Peaches Geldof and husband Thomas Cohen!  The baby boy, who will be named Phaedra will be the second child in less than a year for the pair who are already parents to their 6-month-old son Astala. And while the news may have shocked many, including the couple, Peaches says they couldn’t be happier. 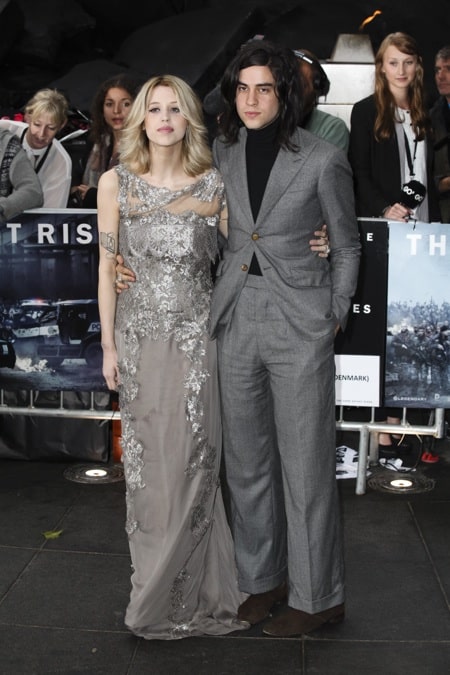 “I may be only 23 and the only one of our friends who’s married, got a baby on the way and is on the verge of moving to Surrey, but it’s a life I’ve always dreamed of and I couldn’t be happier,” Peaches told Hello! magazine.

Peaches says she’d realized she was pregnant again when she started craving the same sour sweets she’d craved while pregnant with baby Astala. She admitted that there had been a brief moment of panic, but says that rocker husband, Thomas, gave her the support she needed to realize they’d make it through.

“I did have a momentary panic and go, ‘Oh my god, we’re going to have a one-year-old and a one-month-old! How will we cope?’ [But] Tom was so supportive and relaxed, it banished my doubts and I started imagining the two boys growing up together as the best of friends,” Peaches said. “There are massive benefits to having two children so close together.”

But the couple says they’re not planning to try for a third anytime soon. They’re hoping to allow their boys to grow up a little before adding a third child to their happy family.

“I don’t think I’ll be adding to our little brood until later on in my life when I’m older and don’t have two toddlers running around demanding all of Tom’s and my attention,” Peaches said.

What makes this second blessing even more special is the fact that Peaches had given up her dream of having children after experiencing an ectopic pregnancy – a serious complication in which the baby develops outside of the womb.

“I woke up in the night in the worst pain. It was like something was ripping me apart. I had no idea I was pregnant,” Peaches shared. “I was taken to the hospital and they discovered what it was. I was told if I had left it even three more days, I would have died…I had to have an operation and the doctor told me he’d have to remove my fallopian tube. I was crying and begging him not to. When I woke up, he told me he’d saved the tube but it was badly damaged, and my chances of having kids had gone from slim to non-existent.”

Peaches said she tried to think of ways that she could still be a mom, but had ultimately given up hope.

“I was really upset because I always knew I wanted kids and then I was told I would need major intervention if that was going to happen,” she said. “I was thinking of freezing my eggs and all these things, but you just have to face the idea you just won’t have children.”

And yet they are now expecting their second child so soon after the first one was born. I’d say her mommy dreams are coming true. How wonderful that she’s having the chance to enjoy mommyhood times two!