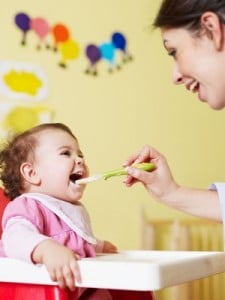 When a baby is ready to add solid foods to their diet, most parents reach for the boxes of rice cereals that have been marketed since the 1950s. Pediatrician Alan Greene warns, however, that this white rice staple is actually an unhealthy option for infants to eat.

Infant food companies began marketing the white rice cereals for infants in the 1950s. Prior to that, most parents simply fed their infants soft mashed versions of the same fruits and vegetables they were serving the rest of their families. However, during that era there was a push toward man-made products over more natural ones. Infant formula was pressed as better than breastmilk, and processed rice cereals were considered to be better than more natural foods.

“The ads said, ‘You can’t feed children as well as we can, ” says Greene, author of Feeding Baby Green.

More than 50 years later, and most parents are still reaching for these staples to feed their infants. Dr. Greene is not alone is his concern for these packaged and processed foods. Despite the common idea that these rice cereals are somehow better for infants, there has been little to no research to prove this as a fact.

But David Ludwig, director of the Optimal Weight for Life program at Children’s Hospital Boston, says “there’s no scientific basis for this recommendation. That’s a myth.”

Dr. Greene is now pressing a White Out campaign, urging parents to get the white, processed rice foods out of their infants diets and back onto a natural diet of fruits and vegetables. He says that many infants will thank their parents for these bites of natural foods, over the bland processed cereals. Not only do these foods have more flavor, they also provide much more nutritional value to infants.

White rice — after processing strips away fiber, vitamins and other nutrients — is a “nutritional disaster,” Ludwig says. It’s “as processed as anything in the food supply” and “the nutritional equivalent of table sugar.”

However, not everyone is concerned about the steady diet of processed white rice in infants. The USA Rice Federation spokesperson, Stacy Fitzgerald-Redd, says rice is recommended because it has no properties that could affect infants with allergies. Because it is more processed, the white rice causes fewer upset stomachs.

For the first year of an infants life, most of their diet comes from breastmilk/formula and grains. Because grains are such a major part of an infant diet, Dr. Greene warns that infants who rely on these processed rice cereals are simply filling their infants up on nothing.

“I don’t want people to feel guilty,” Greene says. “I have four kids and I figured this out just recently. But it’s time to change.”

Instead, parents can opt for whole grain and multigrain cereals instead. Parents can also feed their infants mashed and pureed fruits and vegetables from their own kitchens. – Summer, staff writer