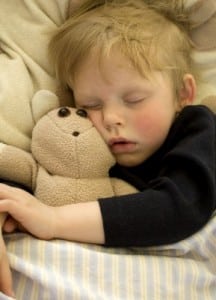 Most children snore at some point. Frequent snoring, however, is a problem according to a recent study published in the journal Pediatrics.

Children who snore chronically, loudly, mouth-breathe, or simply seem to stop breathing for a few seconds at a time, they have what doctors refer to as sleep-disordered breathing. The recent study, led by researcher Dean W. Beebe of Cincinnati’s Children’s Hospital Medical Center, indicates that children with sleep-disordered breathing problems are more likely to display behavioral problems, like ADHD.

According to a standard questionnaire filled out by parents, 35 percent of the persistent snorers scored high enough to be considered “at risk” for a behavioral disorder. This doesn’t mean they have one, but that they are at risk.

“It’s not necessarily diagnostic, but they’re showing more problems than is typical,” Beebe said. He admitted that it is possible that parents who are more likely to complain about their child’s snoring are more likely to complain about behavioral problems as well. If that was the case, however, then more parents in the transient snoring group should have scored high for behavioral issues.  “But that’s not what we see,” he said. “It’s only if they’re snoring at both ages.”

Beebe’s study isn’t the first to link sleep-disordered breathing with behavioral problems in children. Others studies have reached the very same conclusion. This study does add to the pot, however, driving home the message that parents really should talk to their pediatrician if they believe their child is exhibiting symptoms of sleep-disordered  breathing.

“Kids are going to snore sometimes, especially when they have a cold,” said Beebe. “It’s when the snoring persists that it gets concerning.”

He adds that loud snoring should also serve as a warning flag for parents. All suspected sleep-disorder breathing problems should be addressed with a pediatrician.

For many children, the loud snoring is a result of enlarged tonsils or adenoids. Removing the excess tissue can help improve night-time breathing. Unfortunately, there is no evidence that links treatment of a sleep-disordered breathing problem with a lower risk of behavioral problems. While some studies have indicated that treated children have improved, there weren’t any control groups or randomized treatment groups, which are considered “gold standard” in the world of medical research.

“There is reason to believe that treatment might be helpful,” Beebe said. “But we don’t have the strong evidence we’d like.”

There is, however, a study currently underway that will help to determine whether or not tonsil and adenoid surgery helps with some kids’ behavioral problems. Until that time, parents should know that persistent snoring isn’t normal. They can also do their best to educate themselves on what information is available.

For example, animal-based studies have indicated that it’s possible that brain circuitry is decreased by the repeated decreased oxygen levels from sleep apnea.  And former studies have indicated that “nap-deprived” preschoolers struggle more with puzzles than their peers who do take naps. These studies further add to the possibility that treatment of sleep-disordered breathing problems may help with behavioral problems.