Home » Phoenix Woman Gives Away Her Baby to a Stranger

In a real-life case of “what would you do?” a Phoenix was handed a baby belonging to a woman she’d never even met. The mother is being evaluated for psychiatric problems and the woman who was given the baby is both frustrated and disgusted that anyone could just abandon their child in such a way. 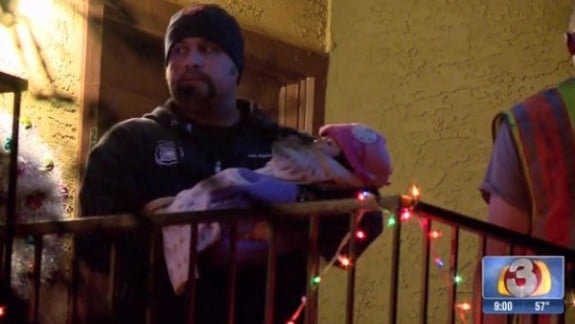 It was around 7pm Saturday night outside of her apartment near 16th Avenue and Peoria that Jennifer Argo was given the baby. Clothed in only a diaper, a onsie, and a hat, Jennifer said she knew that the mother would never return for her three-month-old baby.

“I looked at my neighbor and I was like, ‘She is not coming back….’ And she didn’t; she never came back,” Jennifer told ABC 15. “I’m a mother of three. I couldn’t imagine handing my child off to somebody and saying, ‘here.’”

According to Jennifer, the baby was cold when it was given to her, so she took it inside, wrapped the little girl up, fed her, and then changed her diaper. A little while later, police officers and firefighters showed up to try and unravel the mystery of the abandoned baby who was immediately placed with the Arizona Department of Child Safety.

As it turned out, the 39-year-old woman lived near Jennifer. When police questioned the woman she wasn’t making any sense so they took her to a nearby hospital for a psychiatric evaluation. Police also said there were three other children (a 12-year-old, a 6-year-old, and an 18-month-old) in the house—none of them harmed—and the baby was left with her father.

News broadcasters were unable to reach the mother of the baby for comments, but the father did speak briefly with 3TV, saying that he is concerned for his wife’s mental health. He told police that he had been treating their home for insects when he realized that she’d left. When she returned, she reportedly told him that she’d turned the baby over to the Department of Child Safety.