Home » Physicians ‘Firing Patients’ Who Refuse To Vaccinate Their Kids

With the anti-vaccine movement gaining more traction everyday, many doctors have taken to “firing” their patients. In the wake of a measles outbreak in California, one doctor has posted a crystal clear notice in his office waiting room with a special message for parents who have chosen not to vaccinate their children. 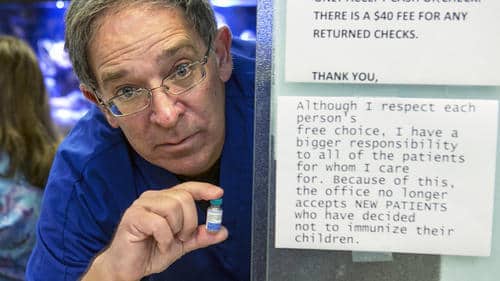 Pediatrician Dr. Charles Goodman of Northridge, California has made the decision to no longer see patients whose parents have decided not to keep their children up to date with the proper vaccinations. Posting the notice at his place of practice, and on Facebook, the announcement reads, “Although I respect each person’s free choice, I have a bigger responsibility to all of the patients for whom I care for. Because of this, the office no longer accepts NEW PATIENTS who have decided not to immunize their children.”

Goodman says, “Parents who choose not to give measles shots, they’re not just putting their kids at risk, but they’re also putting other kids at risk – especially kids in my waiting room.” But Goodman isn’t the only doctor who has “fired” his patients. A small number of other physicians have also done the same thing. Their hope is that by using this “tough love” strategy, parents will eventually change their minds. If that doesn’t work, though, they are hoping that it at least reduces the risk to the children they see in their offices.

The American Academy of Pediatrics states that physicians should always stress the importance of vaccines during a visit, but should also respect a parent’s wishes not to vaccinate, unless there is a significant health risk to the child. Guidelines issued by the group say, “In general, pediatricians should avoid discharging patients from their practices solely because a parent refuses to immunize his or her child.” That is, of course, unless the relationship between the patient and the doctor becomes so strained and both are unable to resolve their issues. At that point, the AAP suggests that the physician encourage the parents to find another doctor.

For some moms who have been let go by their doctors, feelings of upset and betrayal begin to surface, according to Dotty Hagmier, founder of support group Moms In Charge. Hagmier said that these parents who chose not to vaccinate their children decided not to do so after careful and diligent research, and an understanding of the risks versus the benefits of the vaccine, according to their own child’s circumstances. Alternatively, the topic has also become a hot-button issue on online doctor hangout SERMO. Some physicians remain steadfast in their decision not to accept new patients who do not vaccinate their children, while others say that they do not want to be held responsible for a death that could have easily been prevented. Others believe that these patients who are being turned away will end up under the care of “quacks.”

The measles-mumps-rubella vaccine, also known as MMR, is 97 percent effective at preventing the measles, according to the CDC. All states do require that children receive certain vaccines in order to enroll in school. However, California is amongst twenty states that let parents choose not to vaccinate by receiving personal belief waivers. Dr. Nelson Branco, a physician at a Marin County practice, began to turn away tots whose parents refused to vaccinate their children in 2012. Out of his nearly 8,000 patients, Branco said that about 10 to 20 left his practice after that change was implemented. He said “vaccines can be spooky for parents. But in the end, we have the science. We have the experience that it’s the right thing to do.”