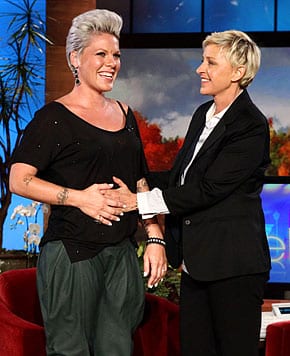 One week after the internet was a buzz that she was expecting – Pink confirms she is, in fact, going to be a mom!

On tomorrow’s Ellen DeGeneres Show, the singer, ‘explains why she’s “glowing” revealing that “I’m eating for two these days,”‘

The new baby will be the first child for Pink and her husband Carey Hart.

The singer kept her pregnancy a secret because she had previously suffered a miscarriage, but only wanted to discuss the matter with Ellen.

A candid Pink was also quick to point out that the baby-to-be was definitely planned saying, “I worked for it…It was not an ‘Oops.'”

Even though the couple isn’t sure if they want to know the gender of their child their doctor has already told them that she thinks she knows the sex the star says, explaining she noticed an anatomical detail in her ultrasound.

“I’m terrified because she thinks it’s a girl!”

“My mom has always wished me a daughter just like me,” she joked. “I’m terrified one of us will go to jail.”