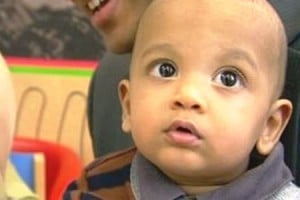 In a world’s first, doctors in London cured a baby boy of a life threatening liver disease by implanting cells that acted like a temporary liver. The procedure was done when the wait for a transplant seemed too long in order to save the boy’s life.

The team at King’s College Hospital in south London say eight-month-old Iyaad Syed was close to death six months ago when a virus had damaged his liver completely causing it to fail.

Instead of going on a waiting list for a transplant, doctors injected donor liver cells into his abdomen. These acted as a temporary liver for him and much like a real liver processed toxins and produced vital proteins.

The cells were coated with a chemical found in algae which prevented them from being attacked by the immune system. Two weeks after the procedure, Iyaad’s own liver began to recover.

Professor Anil Dhawan, a liver specialist at King’s College Hospital says, “This is the first time this treatment has been used to treat a child with acute liver failure. It’s only a few months back when I first saw this child who was so sick requiring support on dialysis and a breathing machine.

“We think we have given him another chance of life and seeing him now six months down the road with nearly normal liver function is remarkable.”

Dr Ragai Mitry, Head of Liver Processing at King’s, who helped in developing the technique, said,

“We are very pleased the transplanted liver cells have helped in supporting and delivering the missing metabolic functions of Iyaad’s failing liver.”

Iyaad’s father, Jahangeer, said his son was “a miracle boy”.

He added, “Once he had the treatment after 48 hours he started to get better and hope came back. It is brilliant and we are very proud of him.”

The team though is urging caution before the treatment can be widely used to help other ailing liver patients.

The key benefit that is being seen is that unlike a transplant where the patient has to take anti-rejection drugs known as immuno suppressants, through this procedure, they won’t be necessary.

Andrew Langford, Chief Executive of the British Liver Trust was hopeful that the procedure could be widely used.

He said,”The principle of this new technique is certainly ground-breaking and we would welcome the results of further clinical trials to see if it could become a standard treatment for both adults and children. Sadly, we have reached a breaking point with our transplant list in the UK, where approximately 100 people die waiting for a donor liver to become available each year.”