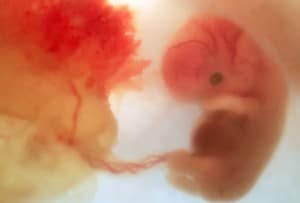 The placenta has always been thought an organ that connects the developing fetus to the uterine wall while providing nutrients from the mother. But a new research gives us a better understand on how this wall also acts as a shield stopping virus invaders from infecting the growing fetus.

Researchers at the University of Pittsburgh School of Medicine have found that the cells of the placenta have a unique ability to act as a barrier against viruses that can enter from the mothers body and harm the baby developing in the womb.

The researchers also add that it might be possible to transfer the same trait to other cells and eventually making it possible to protect babies from all kinds of viral infections during pregnancy.

Co-senior investigator Yoel Sadovsky, chair of Women’s Health Research and professor of obstetrics, gynecology and reproductive medicine said that this function of the placenta was very important as it ensure the normal growth  and development of the baby.

“Our findings reveal some of the complex and elegant mechanisms human placental cells, called trophoblasts, have evolved to keep viruses from infecting cells,” Sadovsky says. “We hope that we can learn from this to devise new therapies against viral infections.”

For the study, Sadowsky and study co-author Carolyn Coyne, associate professor of microbiology and molecular genetics, looked at human trophoblast cells in the lab, exposing them to a panel of viruses.

They found that unlike non-placental cells, these trophoblast were resistant to viral infections. Interestingly it was not because of the virus’s inability to bind to or enter the cell.

When the medium, or fluid environment, in which the trophoblasts were cultured was transferred to non-placental cells, such as those that line blood vessels, they became resistant to viral infection, too, reports futurity.org

Additionally, the team also found that when the medium was exposed to sonic or sound waves, the power to resist virus attacks was not transferred to the non-placental cells.

Using this particular information, they focused on the exosomes, which are tiny spheres called nanovesicles that are secreted by trophoblasts and are sensitive to sonication(exposure to sound waves).

They found that the genetic material microRNA in these cells were able to perform a process called autophagy where the cells can constantly recycle and survive. The same microRNA were also noted in the mimic cells that are created in the lab.

When the scientists blocked this process of autophagy, the cells were again vulnerable to viral infections thus leading them to conclude that this process was in some ways responsible for the viral barrier created by the placenta.

“Our results suggest this pathway could be a powerful evolutionary adaptation to protect the fetus and mother from viral invaders,” Coyne says. “We might be able to use these microRNAs to reduce the risk of viral infection in other cells outside of pregnancy, or perhaps to treat diseases where enhancing autophagy would be beneficial.”

The study increases the scope of further research that can create such barriers artificially and ensure that the baby inside the womb is safe from all kind of microbial attacks.