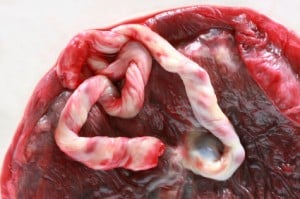 The role of the placenta during pregnancy was always thought to be merely as a nutrition midway between the mother and the baby. But now new research finds that the placenta plays a pivotal role in the development of the baby’s brain during the early stages of development.

Pat Levitt, director of the Zilkha Neurogenetic Institute at the University of Southern California’s Keck School of Medicine and his team found that placenta was a source of serotonin in mice. This chemical helped in determining the wiring of the key circuits of the brain.

The findings were reported in the journal Nature and it is believed that they can explain a lot about brain anomalies like autism and schizophrenia.

“The placenta is not just a passive bag of cells sitting there just allowing things to flow freely between the mom and the fetus,” says Levitt. “We can think of it as a machine that can produce its own hormones, its own chemicals that can have an effect on the developing fetus itself.”

The team discovered the important function of the placenta while studying the role of serotonin in the development of the front part of the brain called the forebrain.

They found that the placenta sends a specific signal at a particular time that, in turn, helps in the development of the brain. The affects of this signal are long lasting and as it is the forebrain that is effectively responsible for the symptoms of autism and schizophrenia, the researchers believe the findings can help study the problems in a new light.

“The forebrain has the circuits that we know are disrupted in autism and schizophrenia, and bipolar disorder, and in anxiety and depression,” Levitt says.

When the team tried to find the source of serotonin in mice, they discovered that it was not coming from the fetus itself and therefore they assumed it to be coming from the mother who did produce the chemical in their body.

“For about 50 or 60 years there’s been this idea that serotonin can be supplied by the mom to the developing fetus,” Levitt says.

But their experiment showed that the mother’s serotonin could not cross the placenta. It was then that they discovered that it was actually the placenta itself that was the source of the important chemical. In mice they found the serotonin was being made by the placenta for a specific period in early fetal development and then it stopped.

Later, the team discovered that in humans too the placenta had the potential to make serotonin.

Levitt feels that based on previous researches, it is possible that the placenta is also providing other important chemicals to the fetus like dopamine, which is also involved in wiring up the brain — and in mental illness.

Ron McKay, a researcher at the Lieber Institute for Brain Development in Baltimore feels this finding may help determine the risk a baby has to have brain illness early on. He feels though the findings are unexpected, they are a very important breakthrough in understanding the brain development during pregnancy.

“It’s nice because we’re very interested now in pinning down the sources of important signals in brain development,” McKay says. “This is a good detective story with a very happy ending.”