Home » Playing in the Dirt is Both Fun and Healthy 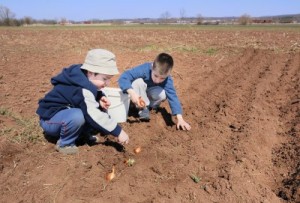 Recent studies confirm what kids have known all along; it’s ok to play in the dirt.  In fact, soil may be beneficial.

Studies, which were presented this week at the 110th general meeting of the American Society for Microbiology, found that mice exposed to a soil born bacterium called Mycobacterium vaccae, were able to consistently navigate through a maze at twice the speed and with less anxiety than the group of control mice.

In 2007, a group of British scientists published a study that found, mice injected with heat-killed M. vaccae exhibited an increase in the production of serotonin which, among other things, moderates emotions and decreases anxiety.

It makes sense according to Dr. Dorothy Matthews, an associate professor of biology at The Sage Colleges in Troy, NY, “If you’re nervous, if you’re frightened, you can’t think straight.”  Mice exposed to the bacteria produced more serotonin, exhibited fewer anxiety behaviors and negotiated the maze with much more ease than the control mice.”

Historically, people spent a great deal of time outside hunting, gathering and working the soil to grow their own food. These activities gave them regular exposure to M. Vaccae.

Now, with an ever increasing number of people live in urban areas, concrete jungles afford little contact with the soil and minimal exposure to this beneficial bacterium.

We gain exposure to M. vaccae by being outside.  Dr. Matthews suggests that, “if you’re vigorously working in the soil, there are probably some particles that are becoming airborne, so we may very well be inhaling it, as well as eating it by inhaling it and having it get into our GI tract.”  People may also gain exposure through contact with foods grown directly in, or close to the soil.

Children who spend time outside on a regular basis may enjoy lower levels of anxiety and an increased ability to learn.  So go ahead, let them get dirty! – Jen R, Staff Writer