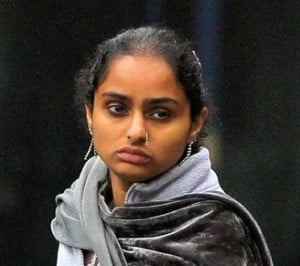 When a mom in UK left her baby alone at home and admitted to it, she was bound to go to prison for at least 10 years. But quite unexpectedly, the woman was spared, thanks to PM David Cameroon’s similar blunder recently when he too left his 8 year old daughter Nancy alone in a pub.

27 year old Aysiea Mahroof left her seven month old daughter at home every day for an hour as she went out to pick-up her five and seven year old children from school. Oddly, she had no idea that it was against the law to leave a child unattended.

When neighbors in Swansea noticed her leaving the home regularly without her baby girl, they made a complaint and police promptly arrested Aysiea.

When arrested, she begged officers, “If I don’t do it again, can I go.”

She added that she could not get the baby’s buggy down the steps outside her home. She also said that she had no one to help as she had been disowned by relatives who had been forcing her into an arranged marriage.

When the case was brought to the Swansea magistrates’ court, Judge Vivian Manning-Davies made the unusual judgment of letting Ayseia go with a warning and a community order with 12 months supervision.

The Judge specifically said that as a parent anyone could make a mistake, even the PM, citing the recent blunder by UK PM David Cameroon who left his daughter Nancy at the Plough Inn in Cadsden, Bucks during a lunchtime break. He rushed back to get her as soon as he realised the mistake.

But the judge also specified that in Ayseia’s situation the case was not child neglect.

Judge Vivian Manning-Davies told her, “A parent makes mistakes in relation to children. I include myself in that statement. Recently, by way of an example, the Prime Minister left his own daughter in a pub. It is not the case that you left children for only self interest. In that situation, I would be sentencing you to a term of imprisonment.

“But this is not a case of you being an uncaring mother, quite the contrary.”

The tearful mom was relieved to hear the judgment as she feared she might be going to prison for 10 years.

She explained, “When I took my children to school my heart was pounding. But I thought I was keeping her safe. No mother wants their child harmed but I didn’t realise it was the law not to leave them. I will never ever do that again. I adore my baby more than anything. She is a bright light for me, without her I wouldn’t be able to breathe.

“I want to thank the judge for ­understanding my feelings and what I am going through.”