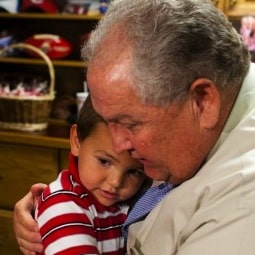 Lehi Police Chief Chad Smith was in Monticello attending a softball tournament before heading to Lake Powell when he stopped over at the pool with his kids and grand kids. Miraculously it was this chance break that helped him save a three year old from choking after he fell in the pool.

Lonni Young and her family had come from Vernal to Montocello for a family reunion. She decided to take the kids to the pool with her sister-in-law. It wasn’t until she noticed a lifeguard pull a limp body out of the pool that she realized her 3 year old son Kaden was not with them.

“I could see the feet, and when she turned I saw the orange shorts and knew that it was my son,” Lonni said. “His arm kind of flopped down and it was kind of like a purple, blue color. So my first thoughts were that he was dead.”

Chief Smith’s daughter noticed the boy as well and she screamed to give Kaden to her father.

“When I got him, his eyes were dilated,” he said. “I’ve never seen a child so far gone.”

He began giving the boy CPR walking into the edge of the pool and lying him down.

“I’ve never seen a baby, anybody, take in that much water,” he said. “It was coming out of his nose and out of his mouth.”

Smith’s son Jake meanwhile looked for pulse and could not find any. Smith knew he had very little time and had to act fast.

“I put my mouth totally over his mouth and nose and everything, and gave him one good puff, and I said, ‘Now check,’ and (Jake) said, ‘Dad, we got a pulse.'”

Kaden began choking and then breathing. When he opened his eyes though, he was a bit dazed to find himself lying in a stranger’s arms.

“I looked down at him and I could see he’s looking at me like, ‘Who are you and why are you kissing me?’” laughed Smith.

The police chief made him comfortable by saying he was grandpa Chad.

Kaden’s father had already called an ambulance and the child was taken to a local hospital where he was given a breathing tube until he could breathe on his own.

But Smith wanted to be sure that Kaden was alright. He visited him in the hospital that night and then again the next day. After Kaden was released from the hospital, the two even took a picture together.

For the chief, the day’s events are a blur but he believes that things were destined to happen.

“Afterward, I was worthless for about four days,” he said. “I was emotionally spent, but it’s bringing our family closer. We have a new family. It’s amazing how the Lord works.”

Since last Friday when the incident happened, Kaden had been after his family to meet ‘Grandpa Chad’. His wish finally came true on Thursday when he visited the Chief at his office.

The visit was a pleasant surprise for Chad who has kept Kaden’s picture on his desk.

Are you kidding me?” he said when he saw Kaden and his family walk into his office. “Wow. What a great surprise. Oh my gosh.”

Kaden was all praises for Grandpa Chad. “You’re my super hero,” he said but Smith thinks otherwise.

“I’m no hero. I just did what others would have done” Smith said. “There were probably other people that could have done it. I just felt there was not enough time to waste. There were some events through that whole process that I was supposed to be where I was at the time.”