Nursing moms are incredible.  We’ve seen story after story of these women stepping up and helping other infants while out in the community.  When officer Celeste Jaqueline Ayala heard a baby’s cries while on patrol at Sor Maria Ludovica children’s hospital in Buenos Aires she asked if she could help.

The baby had reportedly been brought in for neglect and was “smelly and dirty,” hospital staff said.

A new mom,  she could hear the baby needed food but with the hospital staff busy she asked if she could feed the baby.

As she sat down on a chair outside the hospital ward to nurse the baby one of her colleagues snapped a photo.  After posting it on Facebook it went viral and has now been shared more than 100,000 times. 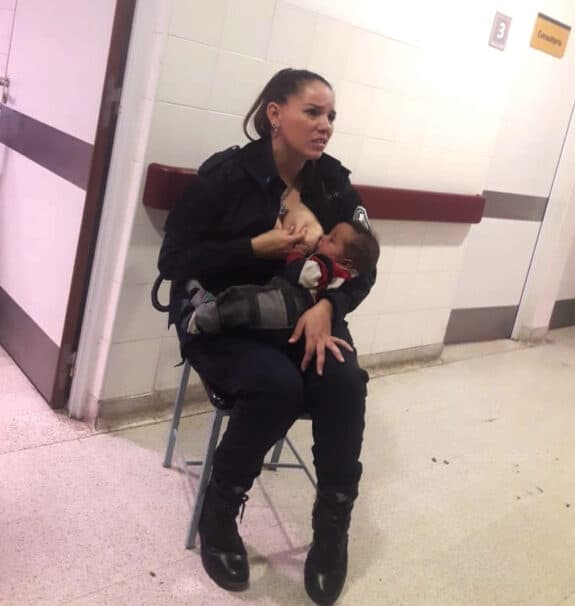 “I want to make public this great gesture of love that you displayed today with this baby,” Marcos Heredia said on the post.  “Who without knowing you didn’t hesitate and for a moment you fulfilled how if you were her mother. You don’t care about filth and smell … things like that don’t [happen] every day.”

Ayala said she did not think twice about helping the baby in need.

“I noticed that he was hungry, as he was putting his hand into his mouth, so I asked to hug him and breastfeed him,” she said to Cronica. “It was a sad moment, it broke my soul seeing him like this, society should be sensitive to the issues affecting children, it cannot keep happening.”

The Buenos Aires Provincial Police told CNN that Ayala spoke with hospital management before she breastfed the baby.

The local media reported the baby is the youngest of six siblings from a single mother who is struggling to cope and in a desperate situation.