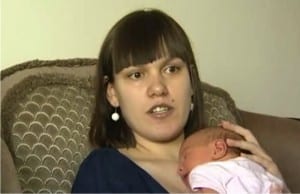 26 year old Inga Munkova does not know what she would have done if two police officers, who were passing by, had not helped her. Her baby had arrived expectantly and she was a bluish color because of the umbilical cord stuck around her neck.

The new mom, who lives in King Lynn but is originally from Latvia, was being driven to the hospital when her water broke.

“I didn’t have time to panic but my husband was very concerned,” she said.”In my home country we would go into hospital much earlier so I thought maybe this was normal for England.”

Inga went into labor in the back of her car in Wisbech, Cambridgeshire. Right at that moment two PCSOs Sam Dyer and Donna Thompson were passing by and stopped to help. 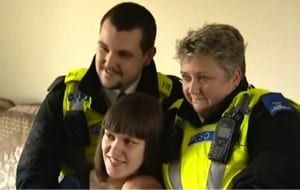 They called an ambulance but soon realised that the baby will not wait.

Says Donna who does not have any medical training, “I’m a mother of four, so I told her that and it helped to keep her calm.”

She helped Inga breathe through her contractions and deliver her baby while Sam called for help.

After she arrived Donna soon realised though that the baby was bluish in color because of the tangled umbilical cord around her neck. She removed it carefully, then cleaned the baby’s mouth and rubbed her back.

“The baby started to cry and turned a lovely pink colour,” she said.

“It was all very fast and very surreal – and it was quite emotional in the end.

“I just went into autopilot,” she explained. “I wouldn’t want to do it every day but it was great, and what a Christmas present.”

Inga is now at home with her baby and says she is very grateful to the two police officers who helped her during such a critical time.