A one year old baby girl experienced her first brush with fame when she received a blessing from Pope Benedict XVI.

Marzena Tyszczak brought her two children and their grandmother to the afternoon mass Pope Benedict was attending for a glimpse at his holiness; little did she know her daughter would receive a personal blessing from the Pope himself.

The Pope arrived in Glasgow to a large crowd of local citizens. While making his way through the large crowd, he noticed a woman holding her child above the crowd at arms length from his window. The Holy Father called then for the procession to stop and asked for the bulletproof window of the Popemobile to be wound down. 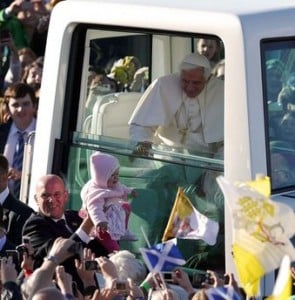 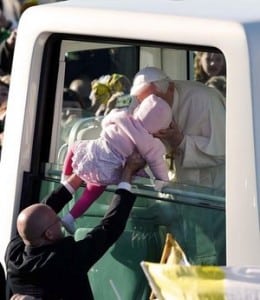 A member of the Vatican’s security team then held Maria up as the Pope blessed the child by kissing her on the forehead than handed her back to her mother who was uncontrollable crying tears of joy.

Witnessing her child’s blessing by the Pope was an overwhelming experience for the twenty three year old Polish woman who moved to Glasgow a couple of years ago.

The mother was quoted saying the experience was amazing. – Jeff, Staff Writer