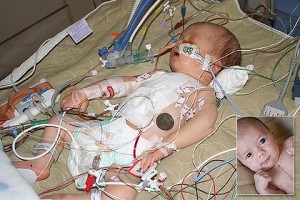 Darren and Tracey Horsley had just become parents when 10 minutes after their baby boy was born the doctors rushed him out of the delivery room. Baby Xavier Lucas had stopped breathing and it was found that he had a heart condition while in the womb, which no one was aware of.

Baby Xavier Lucas was born four weeks premature. When Tracey gave birth to him, the delivery room went silent when the baby stopped crying after ten minutes and had turned blue as he was not breathing. Before even Tracey could see her son, the newborn was rushed out. Hours later, after numerous tests, it was found that Xavier had a rare heart condition.

In the womb, his two main vessels leading into his heart were transposed and his major organs were not receiving any oxygenated blood. The condition, called transposition of the greater arteries was never detected in the prenatal scans and therefore neither the parents nor the doctors knew about it.

It took doctors six days to stabilize Xavier and then he was flown to Melbourne’s Royal Children’s Hospital for an open heart surgery.

The long journey was followed by an equally hard surgery for the doctors and the couple.  Tracey recalls that the first few weeks of her child’s life, she was neither upset or shocked but simply numbed.

“To say the next few days were exhausting was an understatement,” she said. “I think it was at this point the shock of what happened over the last 10 days began to unravel. One by one, we felt a series of steps we had to get through, and each felt like such a painful and agonising wait, but the relief was so welcoming when this stage passed.”

For the parents the days were all filled with thinking about Xavier and constantly checking his weight, blood pressure and heart rate. Being the mother of a newborn and seeing her son in so much pain, Tracey hopes that no other mom should face a similar situation.

“Xavier’s poor body was bruised and battered, and seeing him like this made us feel so helpless and so angry at the same time,” she said.

“No newborn or child should have to experience such pain.

For the couple the shock was all the more because they were not prepared for it and had no idea of the condition.Tracey stresses that their whole family was affected by this and they were all there in Melbourne to support them.

Finally after a successful surgery, four weeks after a hospital stay, the Horsleys were allowed to take Xavier home. Coincidentally his homecoming fell on the same day when his parents had originally booked for a cesearean delivery.

“This was the start of our new life together as a family of four, and was also the first day Xavier didn’t have any monitors or tubes in and we got to hold and cuddle him just like any other normal baby,” said Tracey. “Xavier’s condition is a real paradox. Without the surgery he would have died. However, once the surgery is done, the heart is fixed and he should live a normal life.”

Tracey is happy to see her son healthy but she still sometimes misses those moments when she could have held him and instead he was struggling for life.

“I know I’m not alone when I say these things, so many other mothers have experienced this pain brought by having a premature sick baby,” she said.

According to Heart Kids WA state manager Belinda Frank, Xavier’s condition is not rare. There are more than a hundred children who are born with a congenital heart condition.

The organization without any funding helps in raising awareness among parents like the Horsleys.

“Heart Kids WA were just incredible,” Tracey said. “When we are at the hospital, we have someone there to check on us, to make sure we’ve got the essentials.”

She also adds that the organization helped break the news to her eldest son Blake who was confused when he could not hold his baby brother in his arms.

Tracey and the rest of the family are now raising funds to help spread the word about the organization.