Kylee John knew that she had given birth to a brave heart in spite of her fragile appearance when her daughter Erin clutched her finger tightly for as long as one minute days after she was born prematurely. 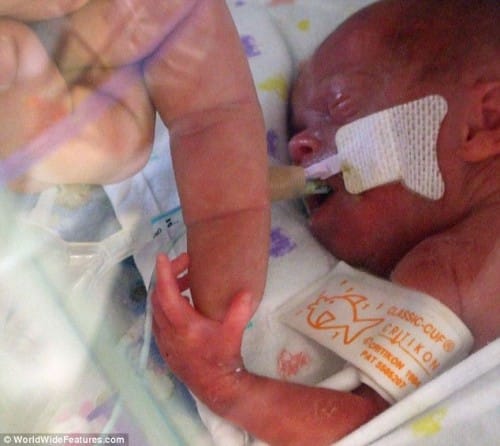 “It was a remarkable moment. My husband Steven captured it on camera. It was as though she was holding on to me. Telling me she wasn’t going to let go.”

Kylee became pregnant with twins in July 2008 but during her routine 23 weeks check up it was discovered that she was suffering from Pre-eclampsia. The mom-to-be was taken to the hospital where her condition worsened to a condition where the body’s organ start shutting down called Hellp Syndrome. Doctors immediately sped into action to save the mother’s life and at 24 weeks Kylee gave birth to identical twins Erin weighing 1 pound and Sian weighing just 10 ounces.

“It was touch and go whether I would survive,” says Kylee. “So even though I was 24 weeks pregnant, doctors decided they had to deliver the twins to save me.”

The births however were not marked by the usual smiles and joyous moments as doctors gave little chances of survival for both the twins.

“When I had recovered, I was wheeled down to see the twins and I just couldn’t believe how tiny they were. Their skin was completely translucent – they just didn’t look like babies at all. The doctors told us right from the start that Sian wasn’t going to survive as she was just too tiny. They had to resuscitate her straight away, but they didn’t know if Erin would survive either as she only weighed just 1Ib.’

But that is when Erin showed her first signs of being a fighter when she held on to her mother’s finger.

‘It was heartbreaking. The doctors told us that it was only machines keeping her alive and there was nothing more they could do for her. Sian slipped away whilst we were by her side.’ says Kylee.

Doctors meanwhile did everything they could to make Erin stronger and healthier. She had a laser eye surgery to stop her from going blind and after 11 months in the NUCI, she finally string enough to go home.

‘She is still tiny for her age.” says her mom, “She wears clothes for six to nine month old babies and she has to have physiotherapy to help her muscles develop but she is now sitting up, and starting to stand. She has a good appetite and she is catching up now with other babies of her age. We are so proud of her.”

“She is one of the smallest babies ever to survive in Britain and she had a massive battle for survival. But she has come through it all – she may be tiny but she is a real fighter.”

Many times these tiny babies arrive with minute chances of survival but somehow work to show us that they are more than a statistic. Never under estimate a preemie. – Lisa, Editor