Our fourteenth profile is of twins Olivia Paige and Logan William. 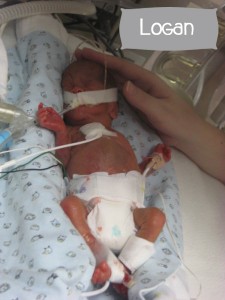 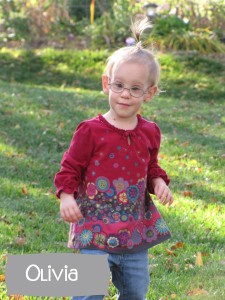 Mom Jodi said that the doctors best guess about why she gave birth so early was because of an incompetent cervix (A condition in which the cervix opens prematurely without contractions.)

At birth Olivia weighed 1lb 1.5oz and Logan was 1lb 1.75oz. Olivia’s NICU stay was as smooth as it could possibly be for a 23 weeker. She had no brain bleeds, no ROP surgery (Retinopathy of Prematurity) as she only got a stage two. She had no issues with bowels, intestines or brain damage. Mom said it was just a miracle.

Logan, however, did not get to go home to his family. He passed away after 1 month, 1 day. Jodi says that people don’t realize how the death of your child will affect you for the rest of your life.

It was tough to plan my child’s funeral, while still not knowing if I would get to take my other child home.

Logan had a grade 2 brain bleed, but no sign of PVL (damage to the white matter of the brain near the ventricles.) Doctors could never get his blood pressure stabilized and his kidneys had trouble functioning and he stopped urinating multiple times. In the end, his heart gave out and after resuscitating him multiple times, multiple shots of epinephrine to the heart, he passed away.

After 105 days in the NICU, Olivia came home. As for lasting effects from her prematurity, Olivia’s skin is severely scarred because it was so underdeveloped at birth. She is about 6 months behind developmentally and has some sensory disorders. She has had one strabismus (eye muscle) surgery and will probably need another one. She wears glasses and has a lot of problems gaining weight. She is 2 years old and 20 lbs.

Jodi and her husband do not have any other children. They tried for 3 years to become pregnant.

We wanted our babies more than anything and I did nothing in my pregnancy that would cause prematurity. It can truly happen to anyone.

If Jodi had one piece of advice for a new preemie mom it would be this: Take care of yourself. I was diagnosed with severe adrenal fatigue about a year later. It is such a stressful time that you run on adrenaline to get you through. Eventually, you can completely run out. Pumping breast milk is the one thing that I felt I could do for my babies when all other new mother experiences were taken away. I never got to hold Logan until after he passed away. I couldn’t hold Olivia until she was over a month old. Providing breast milk was something special I could do for her and Logan.

I asked Jodi to describe her children in one word and she said “MIRACLES.”

These two are definitely miracles in my eyes as well. If you would like to read more about this amazing family and follow their journey, you can go here to Olivia & Logan