Our nineteenth profile is of triplets Mary Louise, David Oliver and Kuylen Stafford. 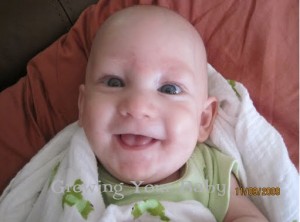 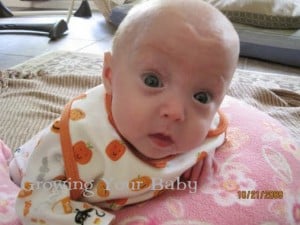 These gorgeous babies were born on April 9th 2009 at 24 weeks 5 days into the pregnancy. Mom Heather went into labor early because of pre-eclampsia/HELLP syndrome.

Heather had been on bed rest in the hospital for exactly one month. She was admitted for pre-eclampsia / HELLP syndrome and the lab work for the week was critical. Heather’s kidney function started to decline and her platelets were dangerously low. She then started to retain fluid and began spotting two days prior to delivery. Kuylen was in distress and they were told he wouldn’t make it but to try to save the other two, so the pregnancy was continued. Heather then went into pre-term labor when David began to have reversal of blood flow in his umbilical cord on the 19th of April and an emergency section was performed.

Baby Kuylen passed away at five days old due to complications which began in utero – two days prior to delivery – from reversal of blood flow in his umbilical cord and placental insufficiency secondary to pre-eclampsia.

Heather was in the hospital for over a week post section due to severe anemia secondary to pre-eclampsia and then she stayed another two weeks post discharge as they were allowed to “board” there at minimal cost as long as a room was available. Mom stayed through the most critical time for the babies – through Kuylen’s death and David’s emergency surgery and recovery. For her, it was one of the hardest moments to actually “move out” of the hospital. She still felt phantom kicks and wondered at times if the nightmare she was in was really happening. Heather went there with nothing but hope and with three babies safe and warm in my belly. However she left with two fighting for breath and life on ventilators and one gone completely. She would visit every morning and go back with her husband every evening (they were lucky to live about 30 minutes away from the hospital). Together, they would pray before they went to bed that the phone wouldn’t ring – if it did, they knew it wouldn’t be good news. It took Heather quite some time not to feel panic every time someone called the house.

During her NICU stay Mary Louise was on a conventional ventilator for about six weeks. Mom and dad were allowed to hold her at about five weeks of age for the first time. Prior to that, they were only able to touch a hand or a foot here and there and change a diaper on occasion. These were the highlights of their days.

Mary Louise had one major infection which turned out to be staph. Heather can’t describe how infuriating and frustrating it is to have a helpless child, whom you haven’t even been able to hold, have an infection that was introduced through the contamination of an IV line. IV access is a funny thing in the NICU – it can kill as it provides a super highway for blood borne bacteria and germs, yet it’s necessary to save them as it (the IV access) provides a way to give life saving resuscitation medications as well as prophylactic antibiotics.

Overall, Heather feels they were very lucky to have only that one early set back with her. Towards the end of her NICU stay, she developed stage II ROP (retinopathy of prematurity) with plus disease which is a common eye issue with premature babies. As the blood vessels grow through their immature eyes, providing the retina with the circulation it needs, they twist and contort and the deformities can cause retinal detachment or blindness. She had to be transferred to a hospital almost four hours away for the laser surgery necessary to fix her vision. Mary Louise was discharged from that hospital at 92 days weighing about 4 1/2 pounds.

David was on a conventional ventilator and an oscillator (alternating between the two) for just over two months. He had emergency surgery for an intestinal perforation at 10 days old when he weighed less than 1 pound. The perforation was successfully repaired however and mom and dad were incredibly lucky that he didn’t develop NEC as David had not yet begun systemic feeds (he was still getting all of his nutrition through IV treatments). He had pneumonia about a month later which caused another switch back and forth from the conventional ventilator to the oscillator (which delivers a stronger and faster breath than the conventional vent). 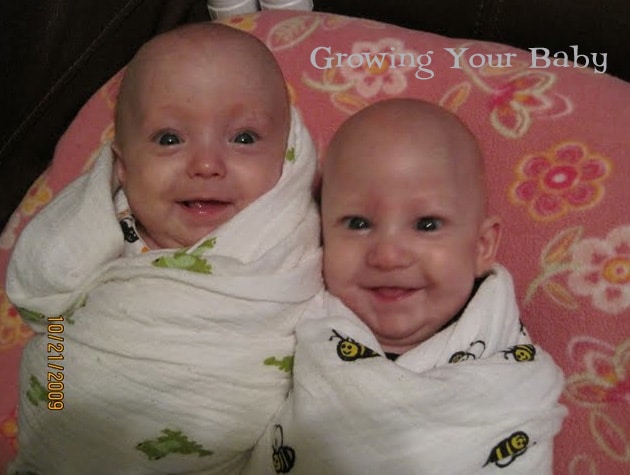 As for lasting effects from the NICU, David is on medication for reflux. He is followed by an opthomologist, cardiologist, neonatologist and pediatrician. He is currently 8 pounds and is almost 7 months old. He is considered developmentally on target with his corrected age though (considering his extreme prematurity, his behavioral age should be that of a 3 month old).

Mary Louise was put on oxygen for 1 month post discharge due to a patent foramen ovale (hole in her heart). It has since closed and she is doing well without any breathing support. She is also on target for her corrected age and is right at 9 1/2 pounds. She is also closely monitored by all of the specialists above.

Mom does daily physical therapy exercises with them to promote their development. They have a therapist as well that comes to the house every month. Both are still on breastmilk but their sucking reflex is inefficient so Heather must pump and feed them with bottles.

As of yet, Heather says that there is no reason to believe that they won’t eventually catch up in growth to their peers.

If Heather had one piece of advice for a new preemie mom, it would be this: Know that you serve a purpose in the NICU. You are allowed to ask questions and if you don’t understand the answer, ask again. Your baby knows you are there and statistically, has a better chance at progressing and developing with a loving and caring touch or snuggle, a soft familiar voice or smell. A NICU can be rather uninviting to parents at times – know that you are needed just as much there as you would be if your baby were home and in your arms.

I asked Heather to describe her children and she said that David is “TOUGH & SCRAPPY” and Mary Louise is “STRONG AND PERSEVERING”.

If you would like to read more about these two amazing children, you can go here to LeBlanc Triplets