Johann was born on October 23rd 2004 at only 24 weeks and 3 days, weighing a mere 698 grams(1lb 9ozs). Mom Adrienne, believes that an amniotic infection may have caused her to go into premature labor. 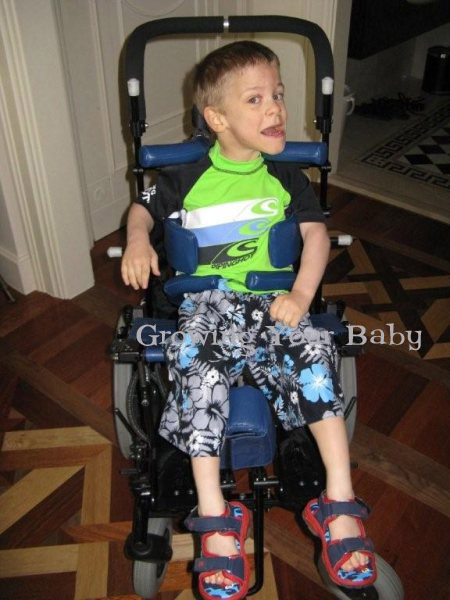 Adrienne says that while Johann was never the sickest child in the NICU, he did go through every preemie complication on the list. It was one thing after another and it seemed like forever for things to resolve.

After 221 long days in the NICU, Johann ended up coming home on a nasal cannula (oxygen) and with a NP tube for feeding.

Since that time, he has been diagnosed with cerebral palsy (spastic quad, dystonia) and is non verbal.

If Adrienne had one piece of advice for a new preemie mom it would be to take things one day at a time. The future will unfold in its own way for your child. Looking too far ahead into the future of you baby can make things hard. And worrying about what has happened to others will not be necessarily what will happen to you and your child. Every child is so different.

I asked Adrienne to describe Johann is one word. He said DETERMINED.

I agree! Any baby born this early has to be determined and he has proved this over and over in his five years of life!