Our seventeenth profile is on a little sweet guy named Aaron. 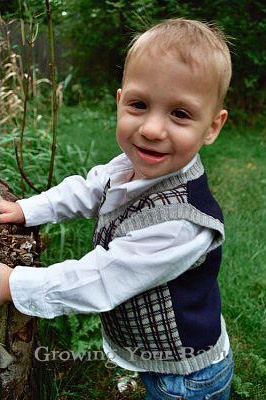 Aaron was born on March 3rd 2008 at exactly 25 weeks. At 20 weeks, mom Kori went in for a routine level 2 ultrasound, where it was luckily discovered that my cervix was “funneling.” (Opening from the inside but not quite yet open externally.) An emergent vaginal cerclage was placed at 20w/2d and partial bedrest followed. The cerclage did its job until 24w/0d when she started contracting, likely due to infection. Kori’s water broke at 25w and the baby was delivered due to infection risk. After delivery, she was officially diagnosed with Chorioamnionitis, infection of the fetal membranes.

At birth, Aaron weighed in at 940 grams. Aaron was diagnosed with BPD (bronchopulmonary dysplasia) and required mechanical ventilation for 7 weeks-both high-frequency and traditional ventilators. He then went to CPAP for 2 weeks, and finally high-flo/regular cannula for two weeks. When they were discharged, we had “standby” oxygen and a pulse oximeter at home, but never needed to provide supplemental O2.

Aaron’s first brain ultrasound showed minor bleeding, IVH grade I. This status remained stable, until the bleed resolved on its own without any visible damage. He had multiple surgeries: 1) broviac placement, NEC (an acute inflammatory disease occurring in the intestines) diagnosis requiring penrose drain placement (a surgical device placed in a wound to drain fluid) 2) exploratory laparotomy which did NOT result in ostomy (surgical procedure that creates an artificial opening for the elimination of bodily wastes) because the perforation had spontaneously & miraculously healed, 3) PDA (patent ductus artieous) ligation, 4) ROP (Retinopathy of prematurity) Stage 3 with Plus disease laser treatment, 5) Bilateral inguinal hernia repair, broviac removal.

Like most preemies, he had multiple infections, blood transfusions and more pharmaceuticals than my grandmother has had in her whole life!

There was one weekend, Easter 2008, when they nearly lost him. He was only 2 weeks old, or 27 weeks gestation. Aaron had just had his PDA ligation and his lungs were in really bad shape. If mom remembers correctly, his blood gas CO2 (carbon dioxide) levels were over 100. They say after PDA ligation, most preemies do worse before they get better. This was definitely true in Aaron’s case!

Aaron is now 20 months old. He is still testing nearer to his adjusted age (16 months), with some skills scattered between adjusted and actual ages. Aaron receives OT, PT and Speech two times per month. He is still wobbly/clumsy when walking (after nearly 4 months of practice). The PT/OT therapists continue to work on strengthening and lengthening his muscles; balance and coordination are their primary focus.

Expressive speech is his biggest challenge currently. Aaron has very few words – maybe 10 approximations – but no clear pronunciations yet.

Feeding has not been a problem for Aaron. He will eat nearly anything I give him and has not had any allergic reactions. Sensory-wise, he seems to no big problems. Aaron has some fear/aversion (there was no way he was going underneath the parachute at Gymboree class!), but nothing outside of the typical range.

If Kori had one piece of advice for a new preemie mom, it would be this: While in the NICU, be your child’s advocate. Be present as much as possible. Act as another member of your child’s care team: Doctor, Nurse, Parent.

Once you are home, begin to work on relaxing. I was concerned about caring for my fragile baby, working the medical equipment, administering meds around the clock and growing / developing this new human being. Preemie child care can be overwhelming, but with the proper support you CAN do it.

I asked Kori to describe Aaron in one word and she said “CURIOUS.”