Our fifth profile is of a sweet little girl named Brianna Rose. 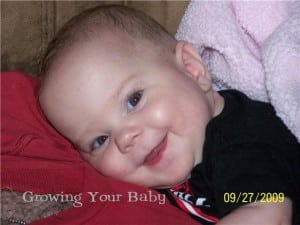 Brianna was born on February 12th 2009 at 25 weeks and 1 day. Mom Melissa had severe preeclampsia that was rapidly progressing to HELLP syndrome. (Pre-eclampsia is a condition characterized by pregnancy-induced high blood pressure, protein in the urine, and swelling (edema) due to fluid retention. HELLP syndrome is a complication of severe preeclampsia.) It was a very scary situation and mom and dad were terrified that they would lose baby Brianna.

When Brianna was born she weighed only 586 grams. Brianna was always a fighter. Every nurse who worked with her described her as “feisty” and they believed that her feistiness helped keep her going strong.

Brianna seldom had bradycardia (low heart rate) but had a really difficult time keeping her oxygen sats up(apnea of prematurity). This was the last obstacle that Brianna had to overcome as she could not even pass the car seat test because her oxygen levels kept dropping. The doctors then decided to put her on caffeine which helped resolved her oxygen issues.

After 117 days in the NICU Brianna was able to go home. As for any lasting effects from her prematurity, mom Melissa thinks it just may be too early to tell. Melissa says that Brianna was fortunate compared to a lot of the babies she has read about. She escaped her NICU experience seemingly unscathed. Brianna still has anemia, reflux and BPD. She takes vitamins, medications and inhalers for these conditions.
Brianna is also on an apnea monitor at night but that is hopefully coming to an end later this month.

Developmentally, she is coming along well. Brianna is functioning right where she should be based on her adjusted age. As for size, she is rather small. She does not suffer from any feeding disorders but can only tolerate three ounces of milk/formula at a time. She is just now starting to try spoon feeding and she has been able to do that once successfully so far. Overall she is a very healthy and happy little girl, and she is the most amazing and magnificent child Melissa could imagine!

Melissa found the NICU experience very stressful. She says that you cannot truly understand that roller coaster ride unless you have been through it. They loved the hospital where they were and found the nurses very helpful and supportive. But despite that it was still very stressful and at times a traumatic experience. Even now, 9 months later, Melissa sometimes struggles. As most moms of preemies realize, the NICU experience doesn’t end when you walk out of the hospital with your baby. Of course they still have to be very cautious with Brianna. They can’t just take her out and about. She can’t go to the grocery store or department stores , to restaurants or even to work where Melissa could show her off. She has had exposure to extended family, but Brianna’s parents try to keep that to a minimum. The risk of her getting sick is just too high, given that her body didn’t have the same chance as full-term babies to fully develop an immune system.

If Melissa had one piece of advice for a new preemie mom it would be this: Take things one day at a time and celebrate all of the small victories.

I asked Melissa to describe Brianna in one word and she said “AMAZING”.

Brianna sure is an amazing child! And might I add cute as a button!!!

If you would like to read about Brianna, you visit her here at Brianna Rose Ganey