Our tenth profile is of a little beauty named Margaret “Maggie” Grace. 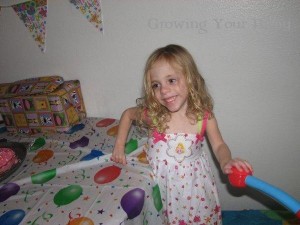 Maggie was born on August 25th 2005 at 25 weeks 2 days. Mom Dana had extremely low amniotic fluid. Maggie was also an IUGR (IntraUterine Growth Retardation) baby. Dana had developed severe pre-eclampsia (a condition characterized by pregnancy-induced high blood pressure, protein in the urine, and swelling (edema) due to fluid retention), which turned to HELLP syndrome (a complication of severe preeclampsia).

Maggie at birth weighed only 15 ounces which is about 425 grams. She was in three NICU’s. The first one she was in for two days, the second one for a week and then the last one for four and a half months. Maggie was born right before Hurricane Katrina and was evacuated from New Orleans to Baton Rouge. Mom and dad did not see her for a week as they were in one hospital and she was in another.

Overall it was a rough four and a half months. Maggie was on and off of the vent and had many infections through her stay and almost didn’t make it several times. There were many nights spent sleeping in the NICU waiting room praying that no one would come tell mom and dad any bad news.


While there we met many people in the same situation. One was a family who lost their preemie four months after she was born. That was hard as Maggie was in the isolette right next to her and when Maggie had ups this little one had downs and vice versa.

Maggie had a fundoplication (a surgical operation for gastro-oesophageal reflux disease in which the upper part of the stomach is wrapped around the lower esophagus) done along with a gastrostomy (A method to facilitate feeding in which a tube is surgically placed directly into the stomach, through the abdominal wall) while in the NICU. Maggie did nipple feed for a while but it was not going great and she suffered from aspiration (milk entering into the lungs) and the doctors felt this was the best option for her at the time. We had some of the best doctors and nurses we could ask for while in the NICU, who made the whole ordeal easier for us.

Mom and dad had clothes and blankets for Maggie made by volunteers and she always had decorations in her corner and on her isolette for every occasion. Mom and dad wanted to make it as close to home as they could. They found out after a month that by playing music-Disney Princess instrumentals in fact-from a CD player, it would calm her down and help her oxygen saturations.

All in all Maggie’s stay was a roller coaster. Ride up and down with the twists and turns. Thankfully this little fighter made it home safe and sound! The technology they have today is amazing and just miraculous in moms opinion!

As for lasting effects from her prematurity, Maggie is little but that is basically all. She had her feeding tube removed in May of 2009 and now eats by mouth. She has great vision and hearing and no other delays except for needing some speech therapy in school as she can not say some letters that well. Mom feels very blessed.

If Dana had one piece of advice for a new preemie mom, it would be this: Have Faith. Do what feels right to you and know that these babies are some of the strongest fighters ever!

I asked Dana to describe Maggie in one word and she said “AMAZING.”

What an ordeal with the NICUs! She sure is an amazing child!