Our sixth profile is of Brian and Rylan. 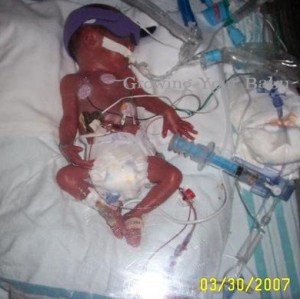 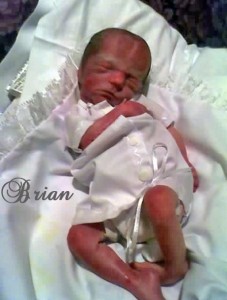 Brian and Rylan were born on March 30th 2007 at 26 weeks 3 days. Mom Jamie is one mom who knows why her sweet boys were born early. Not only did she have Twin to Twin Transfusion Syndrome*, but doctors had also done an amnioreduction (the removal of large volumes of amniotic fluid by amniocentesis) a couple weeks before they were born. This caused the membrane to come loose off the uterine wall which got wrapped around Brian’s umbilical cord slowly cutting off his circulation. When they finally realized Brian had passed away they saw that blood was being shunted in all different directions and Rylan was loosing his life rather quickly so they did an emergency c-section to try and save him.

At birth Brian weighed 1lb 15 oz (he was always bigger than Rylan but mom think he weighed less after being born because he lost body fluids after he passed) and Rylan weighed 2lbs 4 oz.

The NICU stay for Rylan for the most part was fairly easy for them. Everyone had warned Jamie that it would be a rollercoaster ride and some days would be better than others. There was only one time when mom and dad didn’t know whether Rylan was going to make it. This was because they had done a PDA (patent ductus arteriosus) litigation and later that day one of his lungs collapsed. Doctors didn’t know this had happened so he was fighting extremely hard to live until they figured it out. They had Rylan moved from a regular ventilator to an oscillator (the oscillator ventilator provides constant pressure to the baby’s lungs that keeps them inflated with air. It then vibrates very rapidly which can often be seen by watching the infant’s chest wiggle) had his lung deflated at which time he was moved back to the conventional ventilator. After that incident his NICU stay was pretty much just slow and steady. He didn’t really have any more set backs. It was all just about gaining weight and breathing better.

After three months Rylan was able to leave the NICU. As for lasting effects from his prematurity, he has BPD (bronchopulmonary dysplasia) which when he gets sick makes it harder to recover from because his lungs are still pretty weak. He also had several big cysts he had to get removed under his trachea which were caused from being on the ventilator. Other than that, he is great. Mom and dad feel very lucky with him because he is a normal growing toddler now and you can’t even tell he was born so early. 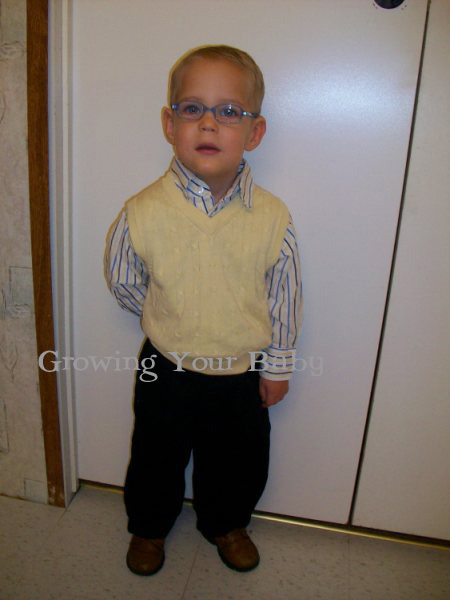 Rylan has a big brother named Aiden who is five years old, born at 38 weeks. He also has a little sister Morgan who is ten months old, born at 37 weeks.

If Jamie had some advice for a new preemie mom is would be this: To think slow and steady wins the race. Don’t get your hopes up too much because in an instant they can come crashing down. When it was getting closer for Rylan to be released I would be thinking ok, today is the day and for almost two weeks I was thinking that same thing every day. It just takes time for them to get stronger and healthier. Prayer is also a great piece of advice: you can’t go wrong saying a prayer for your preemie every day or rather 100 times a day.

I asked Jamie to describe Rylan in one word and she said “MIRACLE”.

This boy truly is a little miracle!

*Twin to Twin Transfusion Syndrome is a condition of the placenta that develops only with identical twins that share a placenta. Blood vessels connect within the placenta and divert blood from one fetus to the other. It occurs in about 15 percent of twins with a shared placenta. In TTTS, blood is shunted from one fetus to the other through blood vessel connections in a shared placenta. Over time, the recipient fetus receives too much blood, which can overload the cardiovascular system and cause too much amniotic fluid to develop. The smaller donor fetus does not get enough blood and has low amounts of amniotic fluid.*