Our first story is a pair of super twins, who arrived under some very unique circumstances.
Children’s name: Twins Peyton Ruby Mae and Marc Anthony
Date of birth: December 25th 2007
How far along were you in your pregnancy? 26.5 weeks
Do you know why your twins were born premature? PROM (premature rupture of membranes)
What did your they weigh at birth? Peyton was 980 grams and Marc was 1000 grams
Tell me a little bit about their NICU stay. 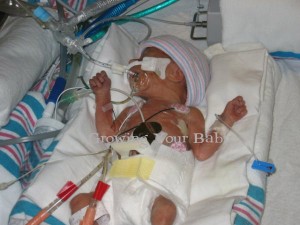 Peyton was twin A, her amniotic sac was thought to be ruptured at 22 weeks gestation. She was a natural birth. with apgar scores of 0/2/2 at birth. She was given surfactant and chest compressions. Peyton was vented for 5 weeks and was given steroid courses to get her off the vent. She was on cpap until she was 9.5 weeks. She left the NICU on a cannula. PDA was closed with medication. She had no brain bleeds and no ROP. Peyton had severe reflux and co-ordination desats and severe bradys. Peyton went home on an apnea monitor, oxygen, and caffeine. 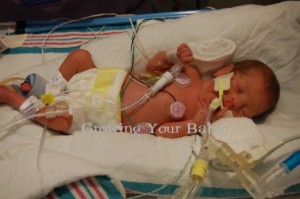 Marc was an emergency c-section. His apgars were 2/2/5. He was given surfactant upon birth. He was on an oscillator vent for 2 weeks, traditional vent for 3 weeks, bi-pap/cpap for 4.5 weeks and cannula for 2 weeks. He had multiple pnu molthorx’s (holes in lungs) requiring three chest tubes. He also had a pembroke drain to release trapped air from his belly. Marc had hyperbilirubin due to very prolonged TPN feeds. He had excessive bile in his gut thought to be an infection and a grade 1 bleed on the right side and a large grade 4 bleed on the left. Even though he had several spinal taps to relieve pressure caused by the bleed, he has not required a shunt thus far. Marcs PDA was controlled (not closed) by medication. He had stage 1 ROP that healed with time. Marc went home with an apnea monitor and on caffeine.

How long were they in the NICU?
Peyton was 127 days and Marc was 97 days.
Are there any lasting effects from their prematurity?
Peyton is developmentally delayed in all areas with the exception of gross motor.
Marc is delayed in all areas. He has mild cerebral palsy and MRI shows PVL. He has a trapped cyst in his brain. At 16 months old he had surgery to close his PDA.
Do you have any other children? Were they premature?
No other children
If you had one piece of advice for a new preemie mom, what would it be?
I would tell other moms that YOU as the mom are your childs best and sometimes only advocate. Never stop fighting for your child and for what he or she needs.
Describe your children in one word: Amazing!