Home » Preemie, Who Was Declared Dead, Comes Back To Life Before Cremation

This guy is one little fighter! A tiny baby in China has shocked many by coming back to life hours before he was scheduled to be cremated. 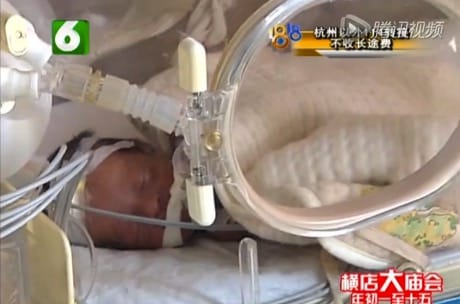 The baby boy was born two months early at the beginning of January.

After spending 23 days in the hospital, doctors determined his condition was stable enough for the family to bring him home for Chinese New Year.

But just two days after coming home, however, Jin Hua Lu, the baby’s dad said the baby showed signs of discolouration.  Worried about his condition, the family rushed him back to hospital.

Shortly after, the baby was pronounced clinically dead after his heart had stopped beating.

When his parents gave up all treatment options, the baby boy was wrapped in two blankets and kept in a freezer in the hospital mortuary overnight.   As the family prepared the cremation ceremony to take place, relatives and morgue workers were shocked when they found the baby alive and crying.

What shocked doctors was that the baby had spent 15 hours in a freezer with temperatures of -12ºC.

When he was found alive,  he was then sent back to the emergency room, where he is now being kept under observation in an incubator. 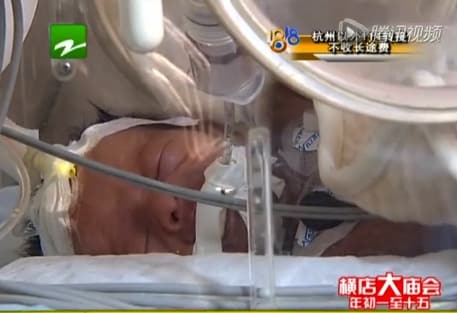 This isn’t the first time that a baby has come back to life after being declared dead.  Twenty-seven weeker, Milagros was declared dead shorty after her birth, but when her tiny box was placed in her father’s hands hours later, he was shocked to hear her cry.