Research has shown that the more weight you gain during pregnancy the harder it is to lose that weight after giving birth. And there’s no disputing that gaining too much pregnancy weight is the biggest contributor to postpartum weight retention. 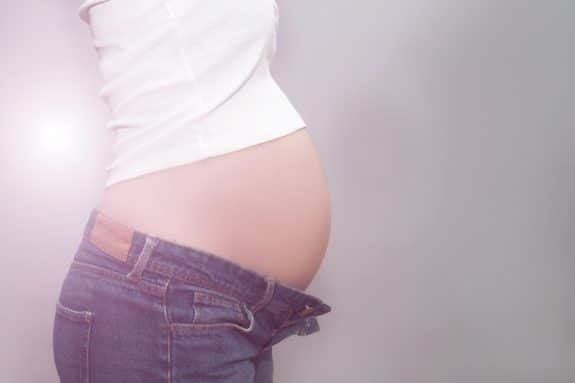 Between 40%-60% of all women gain too much weight while pregnant, and a new study published this month in the journal Appetite explores the connection between excessive pregnancy weight gain and food cravings. Those cravings – frequently for sweets, carbohydrates, starches, and high-fat fast foods – may seem like the body’s way of telling you what it needs, but giving in to those cravings is trouble. The study finds that the more often women give in to cravings, the more likely they are to gain too much weight.

Strong and repeated cravings? You’re high risk for giving in.

Cravings for sweets and fast food were the most common in the study groups, and the most frequently craved foods included chocolate, pizza, cookies and ice cream.

Researchers recruited two groups of pregnant women of similar ages (30-31) to complete surveys on their pregnancy food cravings. One group of 43 was recruited online and 40 women were recruited through a hospital. These women were allowed to complete their cravings survey one time per trimester. The frequency of food cravings associated with weight gain was higher in the online group and it’s noteable – and perhaps requires further research to explain – that the women in the hospital group started out on average at a heavier initial weight than those in the online group. There was also a different ethnic component, with 93% of the online group being white compared to 60% in the hospital group.

The research concluded that weight management during pregnancy needs to incorporate skills to help women decrease the frequency of food cravings and offer better and more effective strategies to avoid giving in to cravings.

Lead researcher Natalia Orloff, a graduate student in clinical psychology at the University of Albany/New York says that an estimated 50%-90% of US women experience some food cravings during their pregnancy.