Mom-to-be Alyson Hannigan spent the morning picking some fresh produce at the Brentwood Market with her husband Alexis and daughter Satyana. 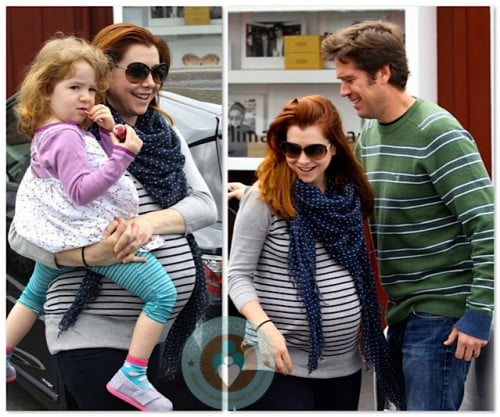 Due in June, the actress must be running low on things to wear. She was spotted earlier this week visiting Rosie Pope’s new boutique in LA picking up some more maternity clothes.

While she is only 33 or 34 weeks along some people think she is further along. During her appearance on The Rachael Ray Show last week, she said:

“The last couple of times I’ve been at stores, people have been like, “Oh you’re ready to pop, right?”

“I’m like, “Actually I have a couple more months,” Somebody said, “You’re sure there’s not two?” I keep asking my doctor the same thing.”

I personally think she looks great and not out of proportion for her size. Do you agree?