A pregnant Molly Sims showed off her growing bump in a figure flattering black lace dress at the Valentino 50th Anniversary And New Flagship Store Opening in Beverly Hills on Tuesday night(March 27). 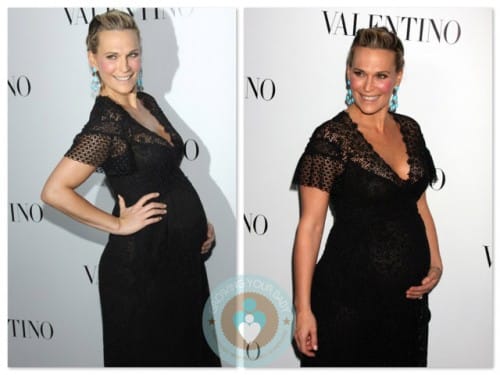 The actress was joined on the red carpet by Rachel Zoe, who couldn’t resist grabbing her belly.

Molly recently told Access Hollywood now that she is in her third trimester she is having less of an issue with craving strange foods and more of a struggle with everyday scents.

“People are always talking about the crazy cravings, but it’s more like the food aversions. The smells – like smoked salmon makes me want to vomit. I can barely stand [the smell] of my own perfume, which I love!”

As the big day gets closer the actress and her husband, producer Scott Stuber, are getting ready by educating themselves.

“We’re just reading and taking it all in,” she said. “I’m definitely going to do a birthing class, which we’re just about to start. I’m going to learn how to breathe and be zen.

“Or I’ll just get an epidural!” she added, laughing.

Not sure which birth plan she is going to follow, she’s getting a lot of advice from friends.

“Some people are like, ‘You’ve got to go with the pain or you’ll never remember it,’” she told Access of her friends’ epidural advice. “Others are like, ‘No [expletive] way!’”